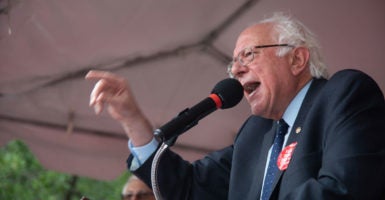 No single company gets perhaps as much attention in the news as Amazon. The online retailing giant has surpassed $1 trillion in market value and is now searching for a city to place its second headquarters.

Amazon has done enormous good in making Americans’ lives more convenient. But not everyone is a fan.

Sen. Bernie Sanders, I-Vt., has introduced a bill targeting Amazon and its founding CEO, Jeff Bezos. Appropriately labeled the Stop Bad Employers by Zeroing Out Subsidies Act (Stop BEZOS), this bill is an unabashed attack on Bezos and his immensely successful company.

Stop BEZOS is meant to incentivize large companies, like Amazon, to pay a “living wage.” Sanders defines a living wage as $15 an hour. This bill would require such companies to pay taxes (dollar for dollar) on the amount of government assistance that its employees collect.

The implicit logic of the Stop BEZOS Act is that Amazon pays its employees subsistence wages (just enough to keep them from starving). In this alternate reality, every dollar of government assistance allows Amazon to pay their employees a dollar less.

Were this true, the simplest, most effective solution would be to deny any government benefits to the employees of big bad companies like Amazon. These employers would then have to raise pay, matching the cut in public benefits dollar for dollar, or risk losing their employees to starvation.

In actual reality, employers both large and small have to offer wages (and benefits) as least as attractive as those of the next employer. The willingness to pay for employees depends on the value produced by the employee, which itself depends on a variety of factors, including overall economic activity, invested capital, and skill levels. Wages also depend on the willingness of workers to trade leisure time for income.

Government assistance actually makes workers less willing to give up leisure time, since it makes it easier for people not to work. That is, it forces Amazon to pay more, not less, to get its workers.

Research completed by several nonprofits (including New Food Economy) indicates that Amazon employees are indeed taking advantage of food stamps in their states—a sign that their income may not be sufficient to provide for everyday needs. Yet Amazon spokeswoman Melanie Etches stated that such research was a misrepresentation of fact, as it also included data on Amazon employees who worked part time or temporarily.

The Stop BEZOS Act could be considered an alternative method of mandating the $15 an hour minimum wage. However well-intentioned, it would have negative economic effects.

As with any minimum wage law, it would likely lead to increased unemployment. Milton Friedman is quoted as saying:

The do-gooders believe that by passing a law saying that nobody shall get less than $9 per hour … or whatever the minimum wage is, you are helping poor people who need the money. You are doing nothing of the kind. What you are doing is to assure that people whose skills are not sufficient to justify that kind of a wage will be unemployed.

Stop BEZOS could have the effect of eliminating lower-skilled workers from the workforce as large companies, burdened with higher employment costs, would have to make cuts somewhere. They may do so by laying off workers, automating or outsourcing more jobs, and the like.

Moreover, detaching wages from worker productivity denies an iron law of economics. For decades, economic researchers have shown that wages are contingent on the additional value that a given worker contributes to the company.

Understanding these marginal decisions is key to grasping the fact that, as Tim Worstall wrote:

The unfortunate fact of minimum wage laws is that they disproportionately push young, low-skilled workers out of the labor market.

The fact is that wage mandates are job-killers. They shrink the economic pie by increasing costs and reducing output. That’s hardly the outcome Sanders should want from the Stop BEZOS Act.

Many politicians seek to win votes by giving stuff away. In the case of minimum wage laws, they are substituting political judgement for the considered calculations of both employer and employee operating in a free decided transaction of money for labor.

Americans should be wary of attempts to win votes by promising “living wages.” And just as importantly, they should follow Worstall’s admonition: “Don’t forget that economics happens at the margin.”