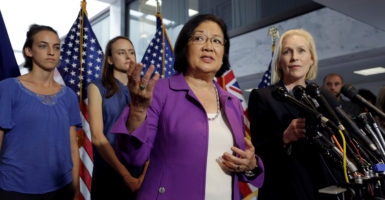 Sen. Mazie Hirono, D-Hawaii, speaks at a news conference with Sen. Kirsten Gillibrand, D-N.Y., as they stand with Holton-Arms alumnae Kate Gold, Sarah Burgess, and others to release a letter from more than a thousand graduates of the school that Dr. Christine Blasey Ford attended, voicing their belief in and support of Ford's accusations against Supreme Court nominee Brett Kavanaugh on Sept. 20. (Photo: Yuri Gripas/Reuters/Newscom)

A Democrat senator suggested that if President Donald Trump withdraws Brett Kavanaugh’s nomination, Democrats could hold the Supreme Court seat open until after the 2020 election.

“The world does not come to an end because we don’t [approve] all of the nominees,” Sen. Mazie Hirono said on Politico’s “Off Message” podcast last week, when asked about a political “gridlock” causing a delay until 2020.

“I think we’ve had those kind of vacancies before,” Hirono added, referencing the possibility of a Democratic majority in Congress. “We certainly had over a one-year vacancy with Merrick Garland.”

Senator Hirono (D-HI): If Kavanaugh’s nomination is withdrawn, Democrats could hold the Supreme Court seat open until after the 2020 election. https://t.co/UwobSAcQiU pic.twitter.com/XiqMXbNZZX

Hirono’s comments come in the same week as an accusation of sexual misconduct levelled at the Supreme Court nominee by Christine Blasey Ford, a California professor of psychology in Palo Alto.

Ford alleges, per The Washington Post, that at a house party in the 1980s, Kavanaugh forced himself on her and tried to remove her clothes. She has agreed to testify to the Senate Judiciary Committee this Thursday.

When asked whether or not the Senate would confirm Kavanaugh in light of the accusation, Hirono told the podcast, “I don’t know … think it’s more of a question [now].”

The Daily Signal is the multimedia news arm of The Heritage Foundation.

Hirono told the podcast she hoped the Senate would receive a nominee other than Kavanaugh, “somebody much more acceptable.”

“I don’t mind a judge being conservative, as long as I feel they don’t have some kind of ideological axe to grind, which Trump appointees have.”

“My hope is that if Kavanaugh does not get confirmed there will be much more of a meeting of the minds and that we’ll be able to get back to an advice and consent process,” she added.