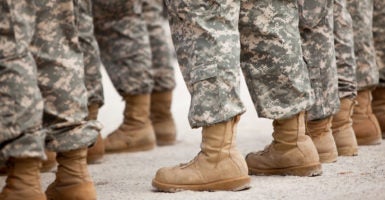 To get higher defense spending, lawmakers have given up on reducing spending in favor of across-the-board increases for most discretionary programs. (Photo: MivPiv/Getty Images)

With the new fiscal year just two weeks away, lawmakers are about to vote on an $855 billion package, combining appropriations for the departments of Defense, Labor, Health and Human Services, and Education.

That’s more than 65 percent of discretionary spending for fiscal 2019.

While the appropriations process has functioned somewhat better this year, the ultimate outcome for conservatives looks to be yet another grave disappointment.

With the exception of defense funding, the bills being put forward fail to reflect the priorities of conservatives. To get higher defense spending, lawmakers have given up on reducing spending in favor of across-the-board increases for most discretionary programs.

They have also capitulated on advancing conservative policy priorities. It’s a high price to pay—not only in the short term, but also for future generations, who will be burdened with more debt and a weaker economy.

What’s in those bills is what matters the most. Judging based on those criteria, Congress is poised to follow the same misguided road of previous years with a bias toward higher spending and no meaningful policy victories.

As the fiscal 2019 appropriations process winds down, some members of Congress are happy with the progress of appropriations bills and the return of “regular order.”

It’s true that Congress has done a better job of following the appropriations process this year. Each chamber passed 12 individual bills through the respective appropriations committees. Six of those bills went on to pass in the House, while nine were passed in the Senate, albeit by being combined into larger bills covering multiple jurisdictions.

What has come out of this year’s process leaves little for conservatives to be happy about, though. Of the five bills that have gone through the conference committee process, the resulting legislation embraces higher spending levels and ignores conservative policy priorities.

Congress should use the appropriations process as an opportunity to evaluate programs and delegate funds among competing priorities, not to increase spending to meet an arbitrary level of funding.

The lack of policy victories is equally troubling. In an effort to move bills in a bipartisan manner, the Senate bypassed including policy riders in its bills. However, the House included policy riders relating to important issues, such as Planned Parenthood, Obamacare, and the Waters of the United States rule in its bills, but they were stripped out during the conferencing process so that the bills would be easier to pass with Democratic support.

This is in spite of the fact that Republicans control the executive and legislative branches.

Has this year’s process really been that much better? Not enough to justify the cost. As of today, only three of 12 bills have actually made it to the president’s desk to be signed into law.

Over the next two weeks, it’s likely that Congress will pass a combined omnibus appropriations act and continuing resolution, meaning that five appropriations bills are funded through the end of fiscal year 2019 and the other seven until Dec. 7 of this year.

Even in a “good” year, Congress is on pace to pass less than 50 percent of the annual appropriations bills before the start of the new fiscal year.

By almost all measures, this is still a failing grade.

Policy matters. One of the advantages of being the majority party is that you set the policy agenda and have a chance to fight for meaningful changes. The appropriations process is a prime opportunity to do just that.

Rebuilding the nation’s depleted military with increased spending is important, but investing in our common defense should not mandate surrender on all other priorities.

Congress should take a second look at the bills currently being put forward and fight harder for policy wins.

The American people are watching.