Her College Told Her Not to Give Out Bible-Themed Valentines. She Isn’t Backing Down. 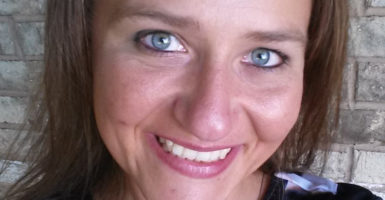 “I want to encourage other students to stand up and use their rights and not be afraid of anyone disrespecting their opinions,” Polly Olsen says of challenging her college's policy. (Photo courtesy of Polly Olsen)

Polly Olsen didn’t feel the love when she gave out handmade, Christian-themed valentines to fellow college students last Valentine’s Day, as she has for years to follow her mother’s example.

A campus security guard intercepted Olsen, a student in the college’s paralegal program, and escorted her to the security office, where she was told to stop because heart-shaped messages such as “Jesus Loves You” and “God Is Love” might offend others.

But that’s what happened after campus security at Northeast Wisconsin Technical College received complaints of “suspicious activity,” prompting Olsen, 29, to file a lawsuit in September against the school.

“If we don’t have freedom of speech, we don’t really have America anymore,” Olsen told The Daily Signal in phone interview. “I want to encourage other students to stand up and use their rights and not be afraid of anyone disrespecting their opinions.”

Security officials told Olsen that handing out her handwritten valentines constituted “soliciting” on campus beyond a designated free speech zone, as well as potentially offending others with valentines that quote Bible verses, according to the Wisconsin Institute for Law and Liberty, which represents Olsen.

In a video released by the law firm, Olsen, a resident of Green Bay, Wisconsin, says she has been “handing out valentines since [she’s] been practically able to walk.” Doing so recently, Olsen says, also has continued a tradition of her late mother, who home-schooled her and used to distribute such valentines at her places of employment.

According to the incident report filed Feb. 14 (Valentine’s Day), campus security previously stopped Olsen from handing out similar valentines on campus about four years ago.

Several months later, college administrators suggested to Olsen that they might change the policy, but didn’t follow through, Rick Esenberg, president and general counsel for the Wisconsin Institute for Law and Liberty, told The Daily Signal in a phone interview.

The Wisconsin college’s “Public Assembly Policy” limits free speech to a small portion of campus. This zone is approximately half an acre, or about 1 percent of the 100-acre campus, Esenberg said.

In the video, Olsen says students and others “don’t congregate” in the free speech zone.

“People aren’t there, they [only] walk in and out of it,” she says.

The college’s policy on “public assembly” also requires those wishing to use the free speech zone to get a permit, regardless of content or context, Esenberg told The Daily Signal, adding:

In a traditional public forum—a typical example would be a town square—you can have a reasonable time, place, and manner restriction. For a university, the campus is a traditional town square. The university can create a designated public forum by permitting speech activities. NWTC has done this, but in this instance it is unreasonable.

The technical college’s policy is unconstitutional, Esenberg said, because of “the vague and broad nature of what is prohibited in the public assembly area.” Also, he said, “a public university cannot limit free speech to a small zone within a campus,” especially if the speech in question is of a peaceful nature. 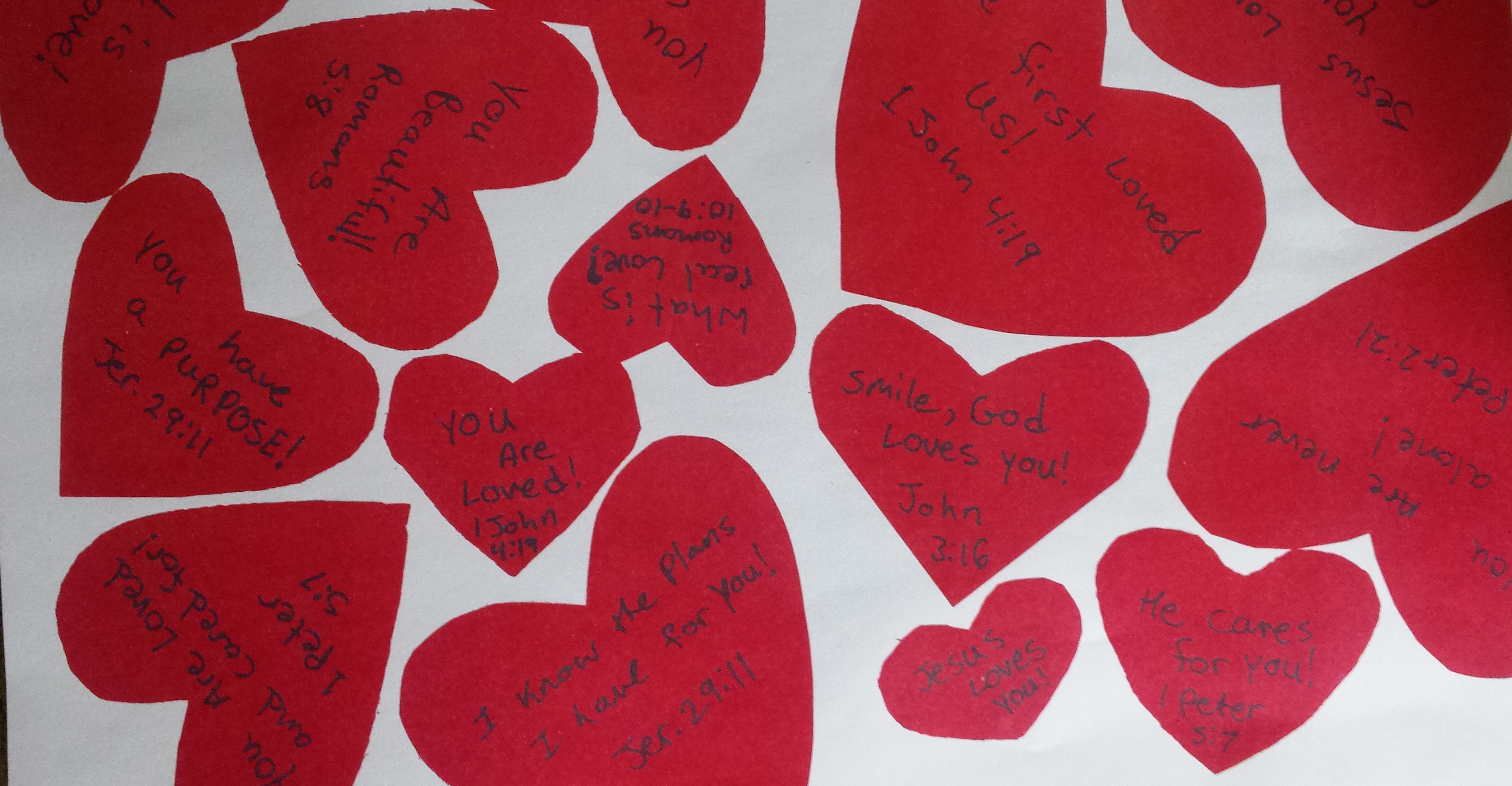 “Religious beliefs are not relevant to this incident,” Karen Smits, the college’s vice president for college advancement, said in a statement released Sept. 5. “We have clubs and activities around a variety of beliefs and experiences, from Intervarsity Christian Fellowship to advanced manufacturing to enrolling at college after age 50.”

Security stopped Olsen in “an area that is not for the public,” Smits said. “Had she been holding anything else—or nothing—she would still have prompted a call to security.”

The Public Assembly Policy establishes space at NWTC [Northeast Wisconsin Technical College] where picketing and mass distribution of literature can occur freely without interfering with students and the business operation of the college. This does not limit what participants can say or distribute (within legal limits).

The law recognizes that, unlike a public park, not all physical areas of educational institutions can be open for public assembly. The Public Assembly Policy provides a process that allows students and non-students to reserve this space.

But Emilie Kao, director of the Richard and Helen DeVos Center for Religion & Civil Society at The Heritage Foundation, sees it differently.

“No student should be punished for exercising his or her right to free speech,” Kao said. “Every student should be able to exercise their constitutional freedom to speak according to their religious beliefs. Public institutions, like Northeast Wisconsin Technical College, should respect the freedom of students to express all viewpoints on Valentine’s Day and every day. ”

“Limiting a student’s speech out of concern that others might be offended leads far too easily to censorship,” she said

Olsen, who was born in Colorado, said in an email to The Daily Signal that her father is a retired “jack of all trades.”

“From owning his own window company, installing heating and air conditioning, to installing security systems, there wasn’t much he couldn’t do,” she said.

Noting that her mother home-schooled her until college, Olsen added:

She taught me my constitutional rights, because she knew there would be a day when they would be violated. The education she gave me has allowed me to test out of some of my college classes. I followed in her foot steps. She had tested out of some of her high school classes and had scholarships to be a doctor, but chose to be a mother and a teacher at home.

Olsen, who expects to graduate this semester from the paralegal program, says in the video that she wants “our freedom [to be] acknowledged across the country and on campuses.”

“I love my school, but I love my freedom, and God, more,” she adds. 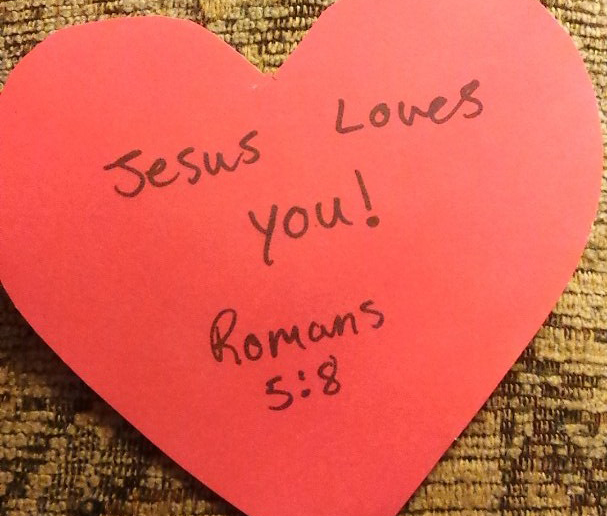 This valentine quotes a verse from the Bible’s book of Romans. (Photo courtesy of Polly Olsen)