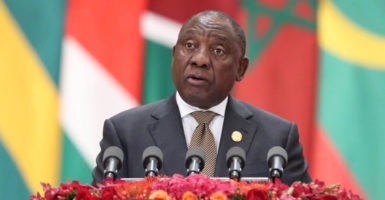 South Africa has been thrown into the news because of President Donald Trump’s recent tweet that he instructed his secretary of state to “closely study” alleged land seizures from white farmers in South Africa.

Earlier this year, a land confiscation motion was brought by radical Marxist opposition leader Julius Malema, and it passed South Africa’s Parliament by a 241-83 vote.

Malema has had a long-standing commitment to land confiscation without compensation. In 2016, he told his supporters he was “not calling for the slaughter of white people—at least for now.”

The land-grabbing sentiment is also expressed by Lindsay Maasdorp, national spokesman for Black First Land First, a group that condones land seizures in South Africa. He says, “We are going to take back the land, and we’ll do it by any means necessary.” The land confiscation policy was a key factor in the platform of the new president, Cyril Ramaphosa.

During each visit, my counsel to South Africans, particularly black South Africans, was that the major task before them was not only ridding the nation of apartheid but deciding what was going to replace it.

That’s an important question. William Hutt, the late University of Cape Town economist who was an anti-apartheid voice within the academic community, wrote in his 1964 book, titled “The Economics of the Colour Bar,” that one of the supreme tragedies of the human condition is that those who have been the victims of injustices or oppression “can often be observed to be inflicting not dissimilar injustices upon other races.”

In 2001, Andrew Kenny wrote an article titled “Black People Aren’t Animals—But That’s How Liberals Treat Them.” Kenny asked whether South Africa is doomed to follow the rest of Africa into oblivion. Kenny gave a “no” answer to his question, but he was not very optimistic because of the pattern seen elsewhere in sub-Saharan Africa.

He argued that ordinary Africans were better off under colonialism. Colonial masters never committed anything near the murder and genocide seen under black rule in Rwanda, Burundi, Uganda, Nigeria, Mozambique, Somalia, and other countries, where millions of blacks have been slaughtered in unspeakable ways, including being hacked to death, boiled in oil, set on fire, and dismembered. Kenny said that if as many elephants, zebras, and lions were as ruthlessly slaughtered, the world’s leftists would be in a tizzy.

Ghanaian economist George Ayittey expressed a similar complaint in his book “Africa Betrayed”: “White rulers in South Africa could be condemned, but not black African leaders guilty of the same political crimes.”

Moeletsi Mbeki, a brother of former South African President Thabo Mbeki’s and deputy chairman of the South African Institute of International Affairs, an independent think tank based at the University of the Witwatersrand, said in 2004 that Africa was in a spiral of decline. “The average African is poorer than during the age of colonialism,” he said.

Zimbabwe, South Africa’s northern neighbor formerly called Rhodesia, was southern Africa’s breadbasket. That was prior to the confiscation of nearly 6,000 large white-owned commercial farms during the 1990s. By the turn of the century, Zimbabwe was threatened with mass starvation and was begging for food.

South Africa leads in mining, food production, and critical infrastructure, such as power production and railroading, in southern Africa. But it’s going the same way as Zimbabwe, spelling disaster for the entire southern part of Africa.

What’s needed most right now is for South Africans to adopt some of the principles enunciated by Nelson Mandela, one of which is, “You will achieve more in this world through acts of mercy than you will through acts of retribution.”