‘First Man’ Omission of the Flag Will Not Rewrite US History 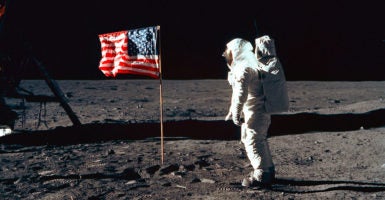 The director and the star of “First Man,” a forthcoming film about Neil Armstrong and Apollo 11, are congratulating themselves for leaving out one of the most dramatic moments in spaceflight and, indeed, 20th-century history, namely, astronaut Armstrong’s planting the American flag on the moon.

The reason: We mustn’t be “jingoistic.”

What’s next? Omitting the Marines hoisting the American flag on Iwo Jima?

Erasing the Statue of Liberty in any shot of immigrants arriving at Ellis Island?

Eliminating President Ronald Reagan in front of the Brandenburg Gate when he challenged Soviet leader Mikhail Gorbachev to tear down the Berlin Wall?

Since when is it “jingoistic” to acknowledge the exceptional acts of an exceptional nation that, for example, led the Allies to victory in World War II, helped transform former enemies Germany and Japan into respected members of the international community, and ended the 40-year Cold War at the bargaining table and not on the battlefield?

America remains the envy of the rest of the world by reason of its free-market economy; its republican form of government that allows for the orderly transfer of political power every two, four, and six years; and its vibrant, innovative culture.

We are that shining city on a hill.

Putting a man on the moon was not a public relations stunt. The 1960s was a star-crossed decade, marred by the assassinations of John F. Kennedy, Martin Luther King Jr., and Robert F. Kennedy. There were deep divisions among the people about the conduct of the Vietnam War. Inner cities were racked by riots and demonstrations. Washington, D.C., was often a city under siege.

America urgently needed a reminder of just how remarkable she is.

When he took office in January 1961, President John F. Kennedy promised that America would land a man on the moon before the end of the decade. He made the commitment as part of his New Frontier and in response to the Soviet launch of Sputnik more than three years earlier.

Kennedy was determined to make America No. 1 in space. His successors—Lyndon B. Johnson and Richard Nixon—were faithful to his promise.

They understood that Americans, after all the troubles of the 1960s, needed a psychological boost. They needed confirmation there was indeed something special, something exceptional, about America.

Frankly, it doesn’t really matter that the producers of “First Man” skipped over Armstrong planting an American flag on the moon. That picture is etched deep in the mind of every American, young and old, thanks to news clips and picture books and YouTube and many of the other sites on the internet.

So, fellow patriots, hit that icon button and marvel at the sight of one man taking a giant step for every American and every other resident of this planet, and delivering on the promise of a farsighted president who tragically never saw what he had promised fulfilled.