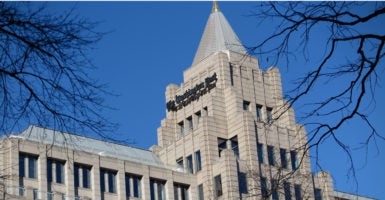 The Trump administration is pushing back against the accuracy of a Washington Post story that suggests Hispanics applying for passports are facing discrimination from the federal government.

Writing that “a growing number of people whose official birth records show they were born in the United States … are now being denied passports—their citizenship suddenly thrown into question,” The Washington Post reported in the Aug. 29 article that:

The Trump administration is accusing hundreds, and possibly thousands, of Hispanics along the border of using fraudulent birth certificates since they were babies, and it is undertaking a widespread crackdown.

“The facts don’t back up The Washington Post’s reporting,” State Department spokeswoman Heather Nauert said in a statement.

A “fact sheet” the State Department released included a chart that found denials of passports because of potentially fraudulent documents have actually declined since 2013 on percentage bias.

“This is an irresponsible attempt to create division and stoke fear among American citizens while attempting to inflame tensions over immigration,” Nauert continued. “Under the Trump administration, domestic passport denials for so called ‘midwife cases’ are at a six-year low. The reporting is a political cheap shot.”

The State Department issued a “fact sheet” purporting the Post story was “false” and expounding on the rate of passport denials:

The State Department’s domestic passport denials are at the lowest rate in six years for midwife cases. Twenty-eight percent of these passport cases were denied in 2017 compared to 36 percent in 2015 under the Obama administration. Based on the current numbers for the year, the department continues to show a decline in denials to passport applicants—the lowest rate of passport applicant denials in six years (please see chart below).

There is no ‘surge’ in denials or revocations related to midwives’ cases, as reported. The U.S. State Department Bureau of Consular Affairs fully complies with policies and practices from 2009.

The Post story begins by quoting someone called “Juan,” who didn’t want to give his real name but was identified as a veteran who fought for the country, who was having difficulty getting his passport renewed. The story doesn’t quote or cite anyone by name facing being unfairly targeted over passport renewal.

However, it quotes Houston lawyer Jennifer Correro saying such cases are “skyrocketing.” Another lawyer, Jaime Diez of Brownsville, Texas, said, “I’ve had probably 20 people who have been sent to the detention center—U.S. citizens.”

Diez said in the Post article that Immigration and Customs Enforcement officials showed up at homes to take passports away—including of Border Patrol agents.

ICE and the Department of Homeland Security did not respond to inquiries from The Daily Signal Thursday. Customs and Border Protection—which oversees Border Patrol—referred comment to the State Department.

The Post story said, “under President Trump the passport denials and revocations appear to be surging.”

This was the first point the State Department “fact sheet” disputed. It said:

Midwives falsely reporting births in exchange for compensation is an old problem that is not unique to the Trump administration. In fact, the administrations of Presidents George W. Bush and Barack Obama, denied passports in these cases as a result.

The Washington Post reported on this issue in September 2008: ‘The federal government won convictions against dozens of South Texas midwives from 1967 through 1997 for fraudulently registering births that they did not deliver, a U.S. official said, with most convictions coming after 1980.’

In another claim, the Post story says, “the administration appears to be taking aim at a broad group of Americans along the stretch of border where Trump has promised to build his wall, where he directed the deployment of National Guardsmen and where the majority of cases in which children were separated from their parents during the administration’s ‘zero tolerance policy’ occurred.”

Again, the policy has not changed. This is a citizen fraud challenge dating back to the administrations of Presidents George W. Bush and Barack Obama. The U.S. Department of State Bureau of Consular Affairs continues to issue passports to applicants based on their applications and evidence, following policies on these types of case that have been in place since 2009.