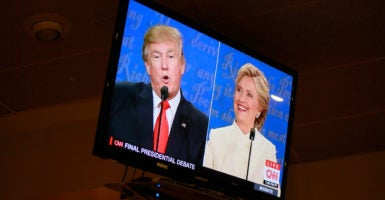 Efforts to elect the president by popular vote has had mixed popularity this year, as Arizona and Maine failed to gather the required number of signatures to appear on the November ballot.

Still, after the Connecticut Legislature voted in May to join the National Popular Vote Interstate Compact, the plan is just 98 Electoral College votes shy of becoming a reality.

Under the compact, states that join agree to award their electors to the presidential candidate who wins the nationwide popular vote, even if the candidate loses that state.

Advocates say this plan would keep the Electoral College in place, reflect the national popular vote, and not require amending the Constitution.

The compact, which has 11 blue states and the District of Columbia on board, would become effective only after gaining enough states to equal 270 votes—or a majority of the Electoral College, the same number required to elect a president.

This almost certainly won’t happen by 2020, said Tara Ross, a retired lawyer and author most recently of “The Indispensable Electoral College: How the Founders’ Plan Saves Our Country from Mob Rule.”

“The 2016 election was good and bad for this movement,” Ross told The Daily Signal. “It was good in that it incited an emotional anti-Trump reaction in support of the popular vote. It was bad thing for this movement because flyover states had a demonstration of why they should like the Electoral College.”

The Founders negotiated the Electoral College as a compromise between large and small states, she said, noting that Hillary Clinton’s popular vote victory over Donald Trump resulted almost entirely from California and New York.

States that feel ignored because of the Electoral College is subject to change, Ross said.

“The pendulum swings back and forth on what is a battleground state,” Ross added. “In the 1980s, Reagan started out with a lock on California and Texas. People used to wonder if Democrats would ever overcome that. What’s a safe state and a swing state changes.”

Maryland was the first to enter the compact in 2007, so it has taken 11 years for the project to reach this point. The proposed compact has passed 36 legislative chambers in 23 states.

Only on five occasions has a president won the Electoral College while losing the popular vote: John Quincy Adams in 1824, Rutherford B. Hayes in 1876, Benjamin Harrison in 1888, George W. Bush in 2000, and Trump in 2016.

Some Republican supporters of the compact point out that Trump repeatedly has backed moving to a popular vote system, despite losing the popular vote to the Democrats’ nominee, Clinton.

“I believe Donald Trump would have won a popular vote election if he had run a popular vote campaign,” Ray Haynes, a former Republican member of the California Senate, told The Daily Signal.

Haynes argues that conservatives in California would be motivated to vote under a popular vote system, arguing many don’t fell their votes barely count with the current winner-take-all electoral system.

What it’s good for is making sure Congress doesn’t run elections. The Electoral College gives that exclusive power to the states. My goal is to look for a way for conservative voices in California to matter. This sets up a way to protect the Electoral College and make sure every voice in every state counts.

Some states can join the compact through an act of the legislature and the governor’s signature. In lieu of legislative support, residents in some states have pushed for a ballot initiative.

The Republican-controlled Arizona House of Representatives had approved joining the compact in 2015, but the compact failed in the Senate.

So, a group called Arizona Popular Vote began a ballot initiative in December 2016. However, it failed to gather the required 150,642 signatures by the July 5 deadline to put the question on the 2018 ballot, according to Ballotpedia, which monitors elections and ballot initiatives.

Bob Hathorne, a retired resident of Scottsdale, Arizona, was among opponents speaking in every Republican legislative district, Republican women’s clubs, and other grassroots groups presenting a slideshow about the problems with the compact.

“It is the women’s clubs that are truly organized and will take action on issues they deem important,” Hathorne said. “Every Republican legislative district played a major role in taking down the insanity of a National Popular Vote Compact.”

“States are free to enter interstate compacts, providing they do not interfere with the sovereign rights of other states not in the compact,” said Hathorne, a retired publisher who is a donor to The Heritage Foundation, the parent organization of The Daily Signal. “Does this compact deny the right of sovereignty to other states? Yes, it does.”

“Every Republican legislative district played a major role in taking down the insanity of a National Popular Vote Compact,” Hathorne said.

To reach 270 votes, participation from some red states is necessary.

“We were the lead red state for their domino effect,” Hathorne told The Daily Signal.

The issue remains alive in Maine, despite a setback.

In April 2017, the effort began to get the issue on the 2018 ballot in Maine. However, supporters failed to collect the needed 61,123 signatures by Jan. 29. The group is working to get the measure on the 2019 ballot, according to Ballotpedia.

“Whoever is president is supposed to have broad geographic support,” Adams told The Daily Signal. “People who support a national popular vote want elections decided in large urban centers. Under the Constitution, Congress would have to approve a compact between states.”

Article II Section 1 of the Constitution states: “Each State shall appoint, in such Manner as the Legislature thereof may direct, a Number of Electors … ”

However, Article 1 Section 10 says: “No State shall, without the Consent of Congress … enter into any Agreement or Compact with another State, or with a foreign Power.”

But the Great Lakes Compact is an interstate compact among eight states regarding water use, as is the 4Powerball lottery, and neither required Congress to sign off, argued Saul Anuzis, a former Republican Party chairman in Michigan who is now senior consultant to National Popular Vote Inc.

“The Founders clearly gave the right to the state legislatures on how to select electors,” Anuzis told The Daily Signal.

Presidential candidates win electoral votes in each state. Currently, 48 states award all of their their electors to the candidate who won the majority vote in their state.

Although only blue states have joined the compact so far, Anuzis contends that a popular vote system would benefit the GOP.

However, without amending the Constitution, such a system would be open to litigation and could result in chaos, said Hans von Spakovsky, a senior legal fellow at The Heritage Foundation.

“The compact is an end run around the Constitution. It would lead to litigation,” von Spakovsky, a former lawyer with the Justice Department and Federal Election Commission, told The Daily Signal. “The national popular vote backers realize they will never convince the public to amend the Constitution. But they can convince [the public] to enter a compact.”