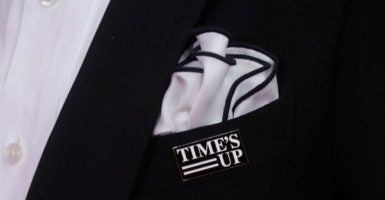 At the 2018 Golden Globe Awards, actors and actresses wore black and showed support for the #TimesUp and #MeToo causes to raise awareness about sexual harassment and abuse of women. (Photo: Carlo Allegri/Reuters/Newscom)

When the issue of workplace sexual harassment and assault becomes political, something has gone terribly wrong.

So is the case for the Time’s Up Legal Defense Fund, established to advance the #MeToo movement.

Perhaps most famous for its pins worn by celebrities on the red carpet for the Golden Globes, the Time’s Up organization’s stated goal—to provide everyday working women with free legal counseling and services to address workplace harassment and abuse—seemingly has nothing to do with politics.

But this week, #TimesUp leaders decided to wade into one of the most contentious political battles of our time: the nomination of D.C. Circuit Judge Brett Kavanaugh to the Supreme Court.

“TimesUp, an organization dedicated to creating a world that insists on safe, fair and dignified work for women of all kinds, will partner with a coalition of women’s groups to rise up and speak out against the nomination of Judge Brett Kavanaugh to the Supreme Court,” the organization announced in a press release.

In hosting a rally Wednesday at the Supreme Court dubbed Working Women Will #StopKavanaugh, the #TimesUp campaign said it plans “to highlight the dangers Judge Kavanaugh poses to women’s freedom to work and support their families.”

The first question about their decision to get involved in such a high-stakes political fight is this:

If Time’s Up is serious about ending sexual harassment and abuse against women in the workforce, how do they plan on doing this by ostracizing the 41 percent of women who voted for President Donald Trump, and by extension, likely support his Supreme Court nominee?

According to the Pew Research Center, only 33 percent of women identify as Democrats. That means roughly 67 percent of women in America aren’t fully or even partly onboard with the agenda Time’s Up supports in this rally.

But Time’s Up is doing it anyways.

The decision is as sad as it is shameful. As we know from the experiences of women such as Gretchen Carlson, who spoke out at Fox News Channel, workplace sexual harassment and abuse doesn’t care about your politics, your skin tone, your financial background, your education, your income, or your religion. It has the ability to affect us all.

But conservative women won’t be surprised to see another “women’s group” hijacked to promote the left’s agenda. We’ve been here before.

At the onset of the Women’s March, #NeverTrump conservatives and pro-life feminists tried to get involved. But because the issue of abortion is so central to the Women’s March mission, they were told they weren’t welcome.

We’re seeing this with #MeToo, too. How is it, after all, that 61 percent of women aged 36-49 say the #MeToo movement hasn’t made things better for them? And why do half of all millennials agree?

Much of that can be blamed on decisions such as Time’s Up to weigh in on issues beyond its scope, effectively turning Time’s Up into another Planned Parenthood, or ACLU.

Sen. Kirsten Gillibrand, a polarizing Democrat from New York, will speak at the Wednesday rally, part of a weeklong “action campaign” hosted by the National Women’s Law Center to “highlight how women’s and girls’ most precious rights and freedoms—including the ability to choose if, how, and when to become parents, access to the full range of healthcare services, and enjoying safe and dignified work places will be on the line if Kavanaugh is allowed a position on the highest court in our land.”

Let’s talk about what Kavanaugh has done for women.

For starters, he hired them. According to his former law clerks, Kavanaugh hired more women for that job than any other judge on the D.C. Circuit Court of Appeals or the Supreme Court. In at least one year, all of his clerks were women.

Then after hiring these young women, Kavanaugh supports them throughout their careers.

Just ask Rebecca Taibleson, a law clerk for Kavanaugh at the D.C. Circuit from 2010-2011, whose wedding happened to fall the week after her clerkship with Kavanaugh ended.

“As we were coming up to the wedding and towards the end of my clerkship with Judge Kavanaugh, I was helping Judge Kavanaugh with a major opinion, and I think we were up to draft 125,” Taibleson told The Daily Signal.

“It became clear that we were still going to be working on the opinion right up to the time I got married, and so I went in to Judge Kavanaugh’s office and I thought this through.”

I was so nervous, and I said, ‘Judge, I’ve been thinking about it and I think I just need one day off before the wedding, just to get everything together, so I can keep working on this opinion right up till then.’ And he just started laughing and I thought, ‘Oh, no. I shouldn’t have even asked. One day is too much. This opinion is too important. Never mind, never mind.’ And he interrupted me and he said, ‘Rebecca, no. You’re going to be taking a full week off before your wedding and I’m not going to hear from you and don’t worry, I’ve got this opinion covered. I don’t really need you on it,’ which is true, ‘and I’ll see you at the wedding and I don’t want to hear a peep from you before then.’

You could also ask Sarah Pitlyk, who also clerked for Kavanaugh in 2010-2011 and had a baby between the time she was offered the clerkship and its start.

“I was the first of his clerks who had ever had that kind of familial obligation to balance with the clerkship,” Pitlyk said.

What did Kavanaugh do? He didn’t ignore it—he addressed it head-on, initiating a conversation with Pitlyk about how he could best support a new mom without compromising his standards for her.

“He asked me what I thought would be best and necessary,” Pitlyk told The Daily Signal. “And we came to a mutually agreeable arrangement.”

“I was just kind of floored,” Pitlyk added, “because I’d only had a child for a year and a half and I’d been working at a firm and I thought they’d been very accommodating. But no one had ever been as respectful and as proactive in trying to help me manage the competing obligations of my career and family as the judge was in that conversation.”

Kavanaugh doesn’t just support and respect women behind chamber doors. As part of independent counsel Kenneth Starr’s team, he investigated President Bill Clinton’s affair with a 22-year-old White House intern—a relationship that, according to Monica Lewinsky, is at least in part a #MeToo story.

Supporting women professionally in private and being advocates for them publicly in pursuit of the truth are central to the mission of the Time’s Up Legal Defense Fund. Not only is the #TimesUp campaign glossing over these facts, but worse, its leaders are choosing to engage in politics at the expense of the campaign’s core values.

When our daughters look back and wonder why women couldn’t come to a consensus to address these evil violations, we’ll point them to examples such as this. It’s not an excuse. But sadly, it’s the truth.