Houston Has a School Spending Problem, and ‘Free’ Lunches Won’t Fix It 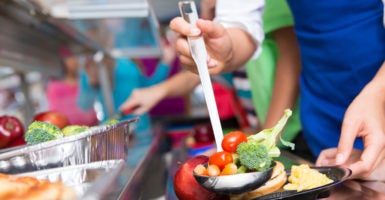 Houston schools will offer free meals to all students this year, but there’s no guarantee that will help more families who are still recovering from Hurricane Harvey, which struck a year ago this week.

Houston officials earlier this month announced that every child is eligible for free school breakfasts, lunches, and dinners. Federal taxpayers are paying for the meals through an Obama-era program called the Community Eligibility Provision.

Typically, the Community Eligibility Provision pays for all students in a school or district, regardless of family income, to receive free meals if 40 percent of the children in the school or district qualify for federal assistance (such as food stamps).

Now all Houston students can receive three meals each school day through the Community Eligibility Provision, the ability to pay notwithstanding.

To date, federal school meal programs have struggled to control costs. A Government Accountability Office report says the Office of Management and Budget calls the National School Lunch Program one of the “high-error” programs “due to its large estimated improper payments—approximately $1.7 billion in fiscal year 2014.”

Another Government Accountability Office report found taxpayer-funded federal lunch and breakfast programs have improper payment rates (the rate of students receiving assistance they are not eligible for) of nearly 16 percent and 25 percent, respectively.

In recent years, school systems in New Jersey and Chicago have found significant abuse of federal school meals programs. In Chicago, some 55 district employees were involved in “falsifying lunch-form data” for over four years.

Making all students eligible for free meals does not fix the system’s inefficiencies. Increasing eligibility is akin to creating another entitlement program. Washington’s poor accounting is no excuse to expand a federal service.

Furthermore, just because Washington is paying for the meals doesn’t make the food free. When the price is hidden from consumers, government-sponsored meals are no different than “free” medicine or “free” housing. People are apt to consume more than they need and create a shortage.

Lessons from other districts demonstrate this principle. In Denver, after the school district offered all students “free” lunches, regardless of whether a student could pay, the district’s “debt from unpaid lunches soared, rising to $356,000 from $13,000 the year before.”

A spokeswoman for the School Nutrition Association told Chalkbeat, “In many districts, allowing all kids to automatically get a free meal … can turn into a real financial challenge for the program.”

Houston has other financial challenges of its own.

At the end of the 2017-18 school year, Houston faced a $115 million budget shortfall. In late April, the district announced that between 200 and 250 teachers and other staffers would be laid off. Those cuts might help in the short term, but Houston has been delaying reforms to its spending patterns for at least 15 years.

It’s not clear that district officials have learned from their mistakes. Officials plan to increase teacher pay based on tenure this year, but district leaders did not include those raises in this year’s budget.

The board of trustees “did not agree on where the money will come from,” the Houston Business Journal reported.

Houston is in a fiscal hole, and federal meals programs have poor reputations for responsible spending. Pairing the two does not solve problems for either.

Policymakers in Washington and Houston have already offered more school district services to families in need after last year’s hurricane. Lawmakers should make sure families that need help can find it, not drive up government spending with free meals for everyone.