In Trip to Utica, NY, Trump to Follow in Truman’s Footsteps 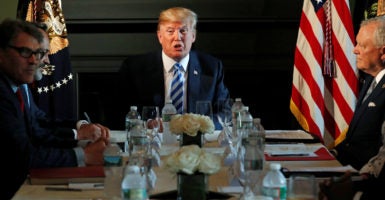 President Donald Trump participates in a roundtable discussion on prison reform Thursday in Berkeley Heights, New Jersey. On Monday, the president will travel to Utica, New York, the first president to do so in 70 years. (Photo: Carlos Barria/Reuters/Newscom)

President Donald Trump is set to visit Utica, New York, on Monday, the first sitting president to visit the city in 66 years, since President Harry Truman made a whistle-stop visit.

“Certainly, it’s a pretty exciting time. It’s a positive boost to the area,” Peter J. Sobel, chairman of the Oneida County Republican Committee, told The Daily Signal. “The things he’s done and continues to do are a benefit for the nation and our area. … It’s a great shot in the arm for Utica.”

Before Truman, just three other presidents had visited Utica, the county seat of Oneida County, located in the Mohawk Valley. With a population of more than 60,000, Utica is the 10th-most populous city in New York.

So why is Utica unusual terrain for presidents?

“It comes down to geography,” Luke Perry, director of the Utica College Center of Public Affairs and Election Research, told The Daily Signal. “Major cities are within a four-hour drive, but unless you’re going to Canada, Utica and the North Country are in a relatively remote part of the country.”

Also on Monday, the president is set to visit Fort Drum in Jefferson County, New York, to sign the $716 billion National Defense Authorization Act for funding the military.

While in Utica, Trump will be attending a 4:30 p.m. fundraiser for Rep. Claudia Tenney, R-N.Y. Tenney’s Democratic opponent, state Assemblyman Anthony Brindisi, scheduled an opposing fundraising event in Utica for the same day, according to the Utica Observer-Dispatch.

“President Donald Trump’s historic visit to the Mohawk Valley is symbolic of the importance he and I place on serving the forgotten people of upstate New York,” Tenney said in a public statement. “We are honored to have President Trump’s commitment to continuing to deliver real results for our region’s hardworking families, small businesses, family farms and veterans.”

We are absolutely honored that @realDonaldTrump is coming to #NY22. Together we will KEEP AMERICA GREAT!

The only open press event for the Utica trip will be Trump’s Air Force One arrival, according to the White House.

Presidential visits can offer a boost to a region, said Joe Kelly, a veteran TV host in Utica and owner of the Boonville Herald in Boonville, New York, about 25 miles outside of Utica.

“It’s always a good thing when a president comes to the area to see you, no matter what party,” Kelly told The Daily Signal. “Who knows what will come of it?”

Truman visited Union Station in 1952 to campaign for then Democratic presidential nominee Adlai Stevenson. In 1948, Truman made whistle-stop tour through Utica for his own campaign.

President Andrew Johnson made a train stop in Utica in 1866. His successor, President Ulysses S. Grant, came to Utica in 1875. The next presidential visit didn’t occur until 1912, when President William Howard Taft attended the funeral of Vice President James Schoolcraft, a Utica native, who died in office.

More recently, while serving as vice president, George H.W. Bush and Dick Cheney each traveled to Utica to campaign for Republican congressional candidates.

As a candidate in 2016, Trump visited nearby Rome, New York, ahead of the Republican primary. His predecessor, President Barack Obama, also traveled to Rome in 2014, visiting the National Baseball Hall of Fame and Museum in Cooperstown, about an hour away.

The impact of Trump’s visit depends on what the president does, said Perry of Utica College.

“If President Trump meets with people—like Truman in 1948 during a whistle-stop tour—beyond the people in the fundraiser, it could have a big impact,” he said. “It appears at this point, it will be only for people paying to attend.”

“Rural voters in New York’s 22 support Trump, and his visit is welcomed enthusiastically by about one-third,” he said. “About one-third of Republicans generally support him, but are concerned about his conduct and tweets. Another third just don’t care for the president’s conduct.”

(This story was corrected to clarify the last time a sitting president visited Utica, New York before Trump.)