Is Pakistan About to Be Caught in China’s ‘Debt-Trap Diplomacy’? 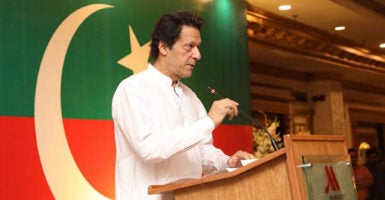 Former cricket star Imran Khan, the incoming prime minister of Pakistan, speaks Monday during an event in the capital of Islamabad. (Photo: Xinhua/PTI/Newscom)

Pakistan has received 12 bailouts from the International Monetary Fund since the late 1980s as a result of debt blowouts and balance-of-payment imbalances.

Now, the country’s 13th bailout from the IMF—expected to be the largest so far—is on the horizon. And China is a key player as former cricket star Imran Khan of Pakistan’s PTI party is set to become prime minister next week.

Despite some efforts to reform and liberalize its economy, Pakistan remains mired in chronic underdevelopment. According to the Index of Economic Freedom, the Pakistani economy is “mostly unfree,” ranking 131st out of 180 economies scored in the 2018 edition.

Pakistan’s external debt burden has mounted to an unsustainable level, thus the likelihood of another IMF bailout.

What makes this latest rescue distinctive from previous ones is the China factor.

Pakistan has become overly dependent on billions of dollars in Chinese loans. It has run up a huge import tab bringing in construction equipment and building materials as part of a Chinese-funded master plan to revamp ports, roads, and railways.

That $62 billion plan, known as the China-Pakistan Economic Corridor (CPEC), has been touted as a long-term, strategic economic partnership that supposedly will increase trade and investment between the two countries.

CPEC is a classic example of China’s aggressive geopolitical outreach through its Belt and Road Initiative, or BRI, aptly dubbed “debt-trap diplomacy” by the editors of National Review:

The heart of the BRI is debt-trap diplomacy: China oversells the benefits of these infrastructure projects, offers credit for them on onerous terms, and, when the bill comes due and its debtors aren’t able to pay, demands control over the infrastructure and influence in the region to compensate.

The attempt to turn these countries into satellite states via the strategic construction of infrastructure is pure geopolitics. China has eyed a westward turn for years, and its desire to advance in Southeast Asia is no secret.

Not surprisingly, the State Bank of Pakistan reported that Pakistan’s external debt has soared to a record $91.8 billion, an increase of nearly $31 billion in the past four years and nine months.

In a recent study, the IMF cited the China-Pakistan Economic Corridor as a factor in Pakistan’s elevated current-account deficit and rising external debt-service obligations.

In response to the looming bailout, Secretary of State Mike Pompeo noted July 30: “There’s no rationale for IMF tax dollars, and associated with that American dollars that are part of the IMF funding, for those to go to bail out Chinese bondholders or China itself.”

In the bigger picture, however, Pakistan’s incoming government must take steps to revive the nation’s economy.

It has been politically expedient for the government to blame this lack of economic progress entirely on Pakistan’s difficult security situation. In fact, the lack of sustained reforms in large part has hindered growth.

This is precisely what Khan’s new government must address.