No, Regulations on Air Conditioners Will Not Lead to More Jobs 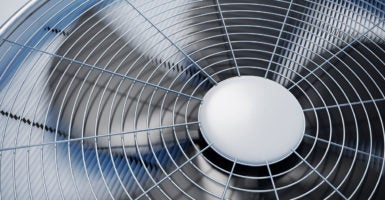 Industry groups are ramping up efforts to have President Donald Trump send the Kigali Amendment—a change to the Montreal Protocol—to the Senate for ratification. The amendment would phase out affordable refrigerants used in air conditioners and refrigerators for much pricier ones.

That’s good news for the patent holders of the new refrigerants and the heating and cooling industry, but bad news for you, the consumer.

The reality is the Kigali Amendment is a United Nations-imposed regulation that would take choices away from the customer while lining the pockets of special interests that have been gearing up for the change.

The 1987 Montreal Protocol was a U.N. agreement to phase out production of chlorofluorocarbons, believed harmful to the ozone layer. The Kigali Amendment is a U.N. treaty that would ban CFC’s replacement: hydrofluorocarbons (HFCs) and hydrofluoro-olefins (HFOs).

The new ban has hardly anything to do with protecting the ozone layer but instead is eliminating HFCs because of their potential impact on global warming.

Proponents of the amendment have hailed the phaseout as a predictable path forward that will create jobs and give American manufacturers a competitive edge. They point to a study prepared for the Air-Conditioning, Heating, & Refrigeration Institute and the Alliance for Responsible Atmospheric Policy that new regulations will create 57,000 manufacturing jobs and an additional 33,000 if the U.S. ratifies Kigali.

Don’t believe the hype. Claiming that a U.N. mandate is an economic stimulus ignores the broken window fallacy.

In his essay “That Which Is Seen and That Which Is Not Seen,” French economist Frederic Bastiat outlines a scenario in which a shopkeeper breaks a window. He pays money to fix the window, creating a supposed “economic benefit” that circulates through the economy.

Likewise, when the government subsidizes biofuels, what is not seen is that labor and capital could have been invested elsewhere in the economy, but are not. Private-sector investment that is not the result of regulations, subsidies, or mandates is the true root of economic growth and prosperity.

Another problem with the industry study is that it relies on a flawed input-output economic model.

First, there is the wrong assumption that regulation creates jobs. Sure, forcing a new refrigerant on consumers means businesses will have to comply with the new regulation. As households and businesses are forced to purchase new air-conditioning and refrigeration systems that use new alternative coolants, HFO manufacturers, equipment manufacturers, and maintenance and repair industries will all stand to benefit.

What the industry study ignores is the opportunity cost of the regulation. HFC alternatives are significantly more expensive. Even if the costs for HFOs or other alternatives fall over time with more widespread use, that’s hundreds of dollars more for a family to fix or replace an air conditioner. Alternatively, the family could have spent that money on a vacation or at the grocery store.

On the other hand, the regulation will prevent the hotel from hiring a new employee, or a restaurant from expanding its kitchen—or consumers will just bear the added costs as room rates and menu prices increase. Regulations force businesses to spend money that could have otherwise been spent elsewhere in the economy.

On net, the economic costs of the Kigali Amendment will outweigh the benefits. After all, if a newer, more energy-efficient technology were going to replace an older one, it would occur without a mandate from the U.N.

The input-output model makes the case that Kigali would produce economic gains by including “induced output,” which “represents the additional demand generated by the disposable income earned in the industry.” In other words, those who work in the industry that would benefit from the regulation would receive higher incomes, and they’ll spend that money elsewhere, creating a positive ripple effect throughout the economy.

But again, an input-output economic analysis ignores where a family could have spent their money absent the regulation, and the ripple effect that spending would have had. If instead of paying for an exorbitantly more expensive air-conditioning unit, the family took a vacation to Florida, the disposable incomes of the resort employees would similarly increase and they would spend their higher paychecks on a new bike and so on.

Note that even if the U.S. does not ratify the Kigali Amendment, U.S. companies will still be able to sell Kigali-compliant products to other countries that have chosen to phase out HFCs. So long as a domestic company chooses to produce HFOs or a different alternative compliant with the stipulations in Kigali, it could sell its product to any of those countries, including within the U.S.

By refusing to ratify Kigali, the Senate would ensure that Americans enjoy more choices and lower-cost options. Homeowners or businesses who need to purchase or repair an air conditioner or commercial unit will have the option of purchasing HFCs or costlier HFOs. Fixing or replacing an air-conditioning unit or a refrigerator when it needs to be fixed will still create jobs, but it will be driven by the consumer’s actual needs—not regulatory dictate.

We’ve heard the “regulations create jobs” argument before from companies who stand to benefit from policies hatched by bureaucrats. Proponents of the energy-efficiency mandates like the incandescent light bulb ban, or excessive regulations on power plants, have similarly argued regulations will stimulate investment in these industries.

But these arguments always ignore the consumer, who will be made much worse off through higher prices and fewer choices.

The economic growth argument for Kigali is more of the same stale thinking.