Bureaucrats Want to Make a Woman With a Grass Allergy Grow a Lawn. She’s Fighting Back. 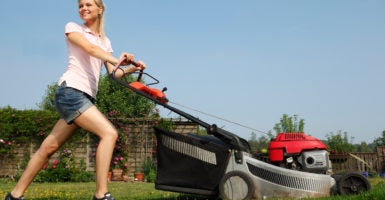 This model isn't Janice Duffner, or she wouldn't be photographed mowing a lawn. She has a grass allergy and is trying to get City Hall to listen. (Photo: Axel Leschinski /agefotostock/Newscom)

Carl and Janice Duffner are in federal court challenging a law in St. Peters, Missouri, that requires them to grow grass in their yard, even though Janice Duffner is allergic to grass pollen.

The ordinance requires residents to grow turf grass on at least 50 percent of their yard or face potential penalties of up to $500, 10 days in jail, or both, for each day of noncompliance.

Because Mrs. Duffner is allergic, however, the Duffners replaced every blade of grass in their yard with flowers, small ponds, walkways, and sitting areas.

Even the city admits that their yard is attractive and well kept, with many of the Duffners’ plants providing low-growing ground cover that has an “appearance, height, and scale similar to grass.”

So, officials decided to force the Duffners to grow grass on only 5 percent of their yard.

That raises the question: If officials have discretion to offer a variance, why not let the Duffners off the hook entirely?

Mrs. Duffner says she takes “a lot of joy in maintaining this beautiful, calming environment, and it was a relief to have limited [her] exposure to grass pollen.”

“I don’t understand,” she says, “why the city wants to force me to tear up part of my garden and replace it with something that makes me feel bad.”

Unfortunately for the Duffners, things have only gotten worse.

In March, they calculated that, owing to their ongoing violations of the grass ordinance, they face potential penalties of more than $180,000 in fines and 20 years in prison.

Fortunately, the Freedom Center of Missouri has challenged the ordinance in court on the Duffners’ behalf.

The Duffners originally filed a lawsuit in state court, where a judge dismissed their case on jurisdictional grounds. The Duffners then appealed the ruling to the Missouri Court of Appeals, which also dismissed some of the Duffners’ claims and ultimately ordered them to go back to the trial court for further proceedings.

In December 2016, the Duffners sought relief in federal court, arguing that the ordinance violates federal civil rights law (42 U.S.C. § 1983), and that the 14th Amendment to the U.S. Constitution should protect what they claim to be a fundamental right to lawfully enjoy their property.

They also argue that the penalties imposed for violating the ordinance are excessive, in violation of the 8th Amendment to the U.S. Constitution, and also raised several claims under the Missouri Constitution.

In March, the federal district court partially ruled for the city on the federal claims and declined to exercise jurisdiction over the Duffners’ state constitutional claims.

The judge reasoned that the ordinance is constitutional in part because the U.S. Supreme Court has upheld against constitutional challenge (see here, here, and here) property regulations that were purportedly based on a government interest in aesthetics.

But those cases dealt with state power to purchase and rehabilitate blighted property, to restrict the commercial use of billboards, and to remove signs from public property.

Forcing homeowners to grow a plant that “makes [them] feel bad,” as Mrs. Duffner says, on pain of criminal penalties, is a far harsher regulation of a more private concern.

What interest could St. Peters possibly have to enact the grass ordinance and to enforce it against the Duffners?

The city has argued that the ordinance was designed to prevent the spread of “noxious and invasive weeds and vegetation” as well as “vermin and other pests,” to prevent water-runoff problems, and to help with soil retention.

But the federal district court noted that the city produced “no evidence in the record supporting [those] purported interest[s].”

“Instead,” the court continued, “it appears that the Turf Grass Ordinance was primarily enacted for aesthetic reasons.”

In fact, the court noted, the ordinance was only “approved after several complaints about a single family home,” one that had “a mix of landscaping materials in their entire front yard, including some wild flowers and other natural grasses.”

Green thumbs, beware if local officials consider a difference in aesthetic preferences to be any reason to threaten to fine and imprison someone.

In 1982, law professor John J. Costonis offered some cautionary words of wisdom about aesthetic regulations that apply to the Duffners’ case today:

“Aesthetic policy … often partakes more of high farce than of the rule of law.”

“Its purposes are seldom accurately or candidly portrayed, let alone understood, by its most vehement champions. Its diversion to dubious or flatly deplorable social ends undermines the credit that it may merit when soundly conceived and executed.

“Its indiscriminate, often quixotic demands have overwhelmed legal institutions, which all too frequently have compromised the integrity of legislative, administrative, and judicial processes in the name of ‘beauty.’”

St. Peters’ grass ordinance may promise beauty, but this case is ugly.

It’s now pending before the U.S. Court of Appeals for the 8th Circuit.

Perhaps there, the Duffners will finally find some relief from this “high farce.”