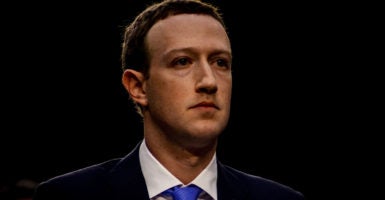 Facebook announced Tuesday that it has removed 32 inauthentic Instagram and Facebook profiles and pages because the company believes they were part of a coordinated disinformation campaign.

“We’re still in the very early stages of our investigation and don’t have all the facts—including who may be behind this. But we are sharing what we know today given the connection between these bad actors and protests that are planned in Washington next week. We will update this post with more details when we have them, or if the facts we have change,” the company said in a statement.

Many of the named pages and accounts seem to espouse progressive or left-wing political messages. One page, “Resisters,” went as far as creating an event scheduled between Aug. 10 and 12 called “No United the Right 2 — DC.”

About 2,600 Facebook users expressed interest in the event and more than 600 said they were attending, according to the company.

“Inauthentic admins of the ‘Resisters’ Page connected with admins from five legitimate Pages to co-host the event. These legitimate Pages unwittingly helped build interest in ‘No Unite Right 2 — DC’ and posted information about transportation, materials, and locations so people could get to the protests,” Facebook said.

The page linking to information to the event has been taken down and Facebook said it would continue sharing information with law enforcement and Congress.

Unlike previous incidents, Facebook did not seem confident it would be able to identify who was behind the campaign.

Over 290,000 accounts followed “at least one of these” fake pages, which had names like “Aztlan Warriors,” a pro-Latin American page; “Black Elevation,” a Black pride page; and “Mindful Being.”

Some images posted from Resisters included memes calling on President Donald Trump to resign from office while others posted images with feminist slogans. According to The New York Times, “coordinated activity was also detected around #AbolishIce, a left-wing campaign on social media that seeks to end the Immigration and Customs Enforcement Agency.”

The pages in question were responsible for creating around 30 events since May 2017, with one event having “approximately 4,700 accounts interested in attending, and 1,400 users [saying] that they would attend.”

The left-leaning nature of this new round of fraudulent accounts throws a curveball into the narrative that outside governments or groups favor one political party over the others.

Since the 2016 election, American intelligence officials have routinely warned social media companies and political campaigns about foreign interference. During the last presidential election, the Russian government was held responsible for spreading “fake news” to users on a variety of websites.

A number of law enforcement agencies have warned that Russia has shown no signs of stopping its behavior, despite repeated denials of wrongdoing from Russian President Vladimir Putin.