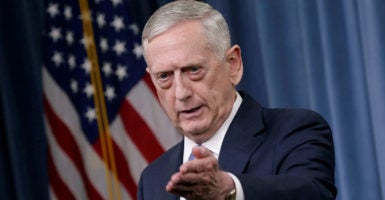 Congress has required the secretary of defense, currently James Mattis, to re-evaluate the highest priority roles and missions of the Defense Department under the new national defense strategy and to optimize the effectiveness of the joint force. (Photo: Yuri Gripas/Reuters/Newscom).

The John S. McCain National Defense Authorization Act for Fiscal Year  2019, which is the reconciliation of earlier House and Senate versions, is good news for the military.

In this article we examine some of the key policy changes, and in a further piece we will look at other aspects of this critical legislation. Some of the key issues addressed in the new version of the NDAA legislation include:

Roles and Missions—Congress has required the secretary of defense to re-evaluate the highest priority roles and missions of the Defense Department under the new national defense strategy and to optimize the effectiveness of the joint force. These extensive reporting requirements are thoughtful and will provide the in-depth analysis needed to best align resources to develop a joint force that is best prepared for strategic competition and America’s national security priorities.

Pay—Authorizes a pay raise of 2.6 percent for members of the armed forces, matching the Bureau of Labor Statistics’ estimated Employment Cost Index increase. This pay raise is necessary to enable the U.S. military to continue to attract qualified talent in the face of toughening labor competition and growing military end strength. With only 29 percent of Americans between the ages of 19-24 meeting the qualifications for military service and record low unemployment (3.8 percent in May 2018), military recruiters are facing intense competition for talented and willing young people to serve.

Size of the Military—Fully supports the Defense Department’s request to re-grow the active-duty military manpower by 24,100 in 2019, helping to regrow the military after years of budget-driven personnel cuts and provide the larger military force essential for the national defense strategy’s focus on great power competition.

Modernizing Officer Personnel Management—Congress has provided the service secretaries with the option to employ a number of new authorities that update the military officer management laws to better meet the needs of the modern military and retain outstanding talent. Among these changes are prioritizing high-performance over seniority for promotion, allowing multiple opportunities for promotion, and providing the ability to bring in officers at a higher rank for special skills and circumstances.

Foreign Investment Reform—While it is a shame that the Committee on Foreign Investment in the U.S. and export control reforms were included in the 2019 NDAA, it does provide the committee greater authority to review some nonpassive investments in critical infrastructure, investments that may harm sensitive personal data, and other transaction types that may circumvent a national security review. In addition, the inclusion of specific committee funding will address its resource problems.

ZTE and Cybersecurity Risks—The bill prohibits the federal government from purchasing or extending contracts with any entity that uses telecommunications equipment, systems, or services produced by the Chinese companies ZTE or Huawei Technologies. These restrictions are reasonable and welcome since these companies were identified as threats to U.S. supply chain security and they only prohibit federal government procurement.

The House overwhelming approved the fiscal year 2019 NDAA by a vote of 359-54 on July 26. The Senate vote is expected later in August.

While the fiscal year 2019 NDAA provides much-needed funding and new authorities to help the Defense Department rebuild the nation’s military, unless Congress can avoid another monthslong continuing resolution in 2019 and avoid a return to the Budget Control Act limits in fiscal year 2020, the gains made over the past two years will quickly be halted or even reversed.