The FAA Is Slowing Down Potentially Life-Saving Drone Technology 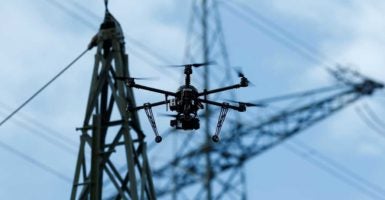 According to a report, the Federal Aviation Administration is being unnecessarily cautious in approving new drone technology. (Photo: Ralph Orlowski/Reuters/Newscom)

Corianna Baier is a member of the Young Leaders Program at The Heritage Foundation.

Regulators too afraid of “making a mistake” are depriving Americans of numerous beneficial and even life-saving drone technologies. That is one of several alarming conclusions in a recently released report taking the Federal Aviation Administration to task for stalling the deployment of drones even as foreign companies and nations surge ahead.

On its own, that finding is hardly news.

For years, the FAA banned commercial drone operations in the U.S. altogether, insisting on reviewing and approving thousands of proposed drone activities before each could take to the skies.

But this report by the National Academies of Science, Engineering, and Medicine takes a broader look at the FAA’s risk culture and regulatory approach, concluding that, as far as drones are concerned, it needs a thorough and complete overhaul.

Specifically, the report evaluated the way that the FAA assesses risk when approving unmanned aircraft systems operations and regulating their use. The report offers 11 recommendations to the FAA for getting drones off the ground and working to improve the lives of Americans.

The National Academies sought the source of this regulatory stagnation and concluded that the FAA is so risk-averse that its “staff may conclude that allowing new risk could endanger their careers even when that risk is so minimal that it does not exceed established safety standards.”

Drone operations are not approved even if they pose less risk than is accepted by society for other activities, such as driving or crossing the street.

In other words, the “status quo is seen as safe” and anything that disrupts it gets a skeptical eye.

At least when it comes to manned aviation, it is hard to argue with the FAA that the status quo is, in fact, quite safe. The FAA deserves considerable credit for helping to foster an aviation safety culture that accepts virtually no risk to human life and, as a consequence, has transformed air travel from a dangerous activity into the safest mode of transportation.

On its face at least, preserving the status quo may thus seem reasonable. But there is a hidden danger in this line of thinking: Regulators may stifle beneficial innovations, not out of malice, but because they fear the uncertainty that comes with disrupting a stable, predictable system—and they equate uncertainty with danger.

The National Academies concluded that the FAA is doing just that to drones.

Regulators are focused almost exclusively on the risks presented by drones, while ignoring the myriad social benefits of this new technology, such as rapid delivery of life-saving supplies. Indeed, regulators seem to be discounting instances where drones can actually reduce overall societal risk by performing dangerous tasks that previously required humans to be put in harm’s way.

For example, cellphone tower inspections could be done with a drone instead of making a person climb to the top of the tower.

The report, as well as prior Heritage publications, discuss the potential benefits of drones that are not yet being realized. It recommends that safety benefits be more heavily considered and that unmanned aircraft system operations be allowed if they decrease the net safety risks to society.

Another major problem is the subjectivity of the drone approval process, due mainly to a lack of data the FAA can use to assess drone safety and risk factors posed by potential new operations.

That subjectivity means any entrepreneur or innovator applying for a drone authorization faces a lengthy, laborious, and unpredictable process that ultimately hinges on the arbitrary decision of a regulator.

The process clearly needs improvement, but the FAA has trapped itself between a proverbial rock and a hard place: the agency needs more and better data to develop predictable, objective standards the unmanned aircraft system industry can meet, but the FAA’s own caution severely limits the drone operations needed to gather it.

The National Academies report made clear that FAA “regulations and standards should avoid being proscriptive, allowing for innovation.” The report and Heritage scholars agree about many of the problems with the current regulatory regime.

Hopefully the FAA will take notice, and shift its culture from one that focuses almost exclusively on “what might go wrong,” toward a more flexible regulatory approach that welcomes innovation. The recently announced Integration Pilot Program is a step in the right direction, but more can be done.

Safety should always remain a priority but, as the report points out, being too rigorous can, counterintuitively, lead to less safety and greater risk by preventing new technologies from being deployed.