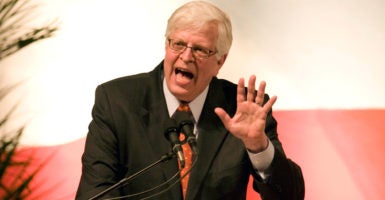 Talk radio host Dennis Prager speaks at the University of Denver in 2010. He told a Turning Point USA conference for teenagers Tuesday at George Washington University in Washington, D.C., that America is not about the identity politics of race or ethnicity, it's about shared American values and ideas. (Photo: Miles Chrisinger/Icon SMI AAO/Miles Chrisinger/Icon SMI/Newscom)

While speaking last year with a black man shining shoes at the airport in Newark, New Jersey, about his time in America, syndicated talk-radio host Dennis Prager said he asked the man whether he thinks America is racist.

There was a tense pause as the man nervously looked around.

“It was clear he was a little embarrassed to say, ‘No, it’s not racist at all. I love it here,’” recalled Prager, the founder of PragerU, a website that creates videos touting conservative values. “He felt like he was betraying what he was supposed to say because he was black.”

Prager says that the man’s feeling of “embarrassment” shouldn’t be occurring in America today.

“This is the least racist, least xenophobic, multiracial country in the history of the world,” Prager told about 800 15- to 18-year-olds at the High School Leadership Summit, an educational conference for young conservatives sponsored by Turning Point USA. The nonprofit organization says its mission is “to educate students about true free-market values.”

Prager shared what he said was a “little-known statistic” first reported in the New York Times by columnist William Safire in the 1990s.

“Africans want to come to America. … More blacks have come from Africa to the United States willingly [and] voluntarily than came as slaves,” he said in his remarks at George Washington University’s Lisner Auditorium. “Why would they come to a racist country? They want to come here because they know how well they will be treated.”

To Prager, American values and ideas should trump the identity politics of race and ethnicity. He noted, however, that there’s a difference between the left and liberals.

Prager told his youthful audience that they could ascertain that simply by asking a single political litmus test question.

Today, America’s founding values are under attack, he said.

“You are not entering a happy America,” he warned. “You are entering an America fighting once again for [those values].”

“People can actually say on national television that Helsinki news conference between President Trump and President Putin was equivalent to Kristallnacht, which was the opening of the Holocaust,” Prager said, referring to Trump’s appearing to side with Putin as he criticized U.S. intelligence agencies.

“Let me tell you, as a Jew, how disgusting and vile it is to compare the supporters of the president to Nazis,” he added.

Prager concluded his 30-minute speech by calling on members of his youthful audience to fight to preserve the United States.