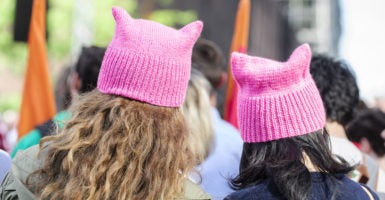 This photo was taken at an anti-Trump protest in Brussels, and features the pink hats featured at the Women's March in Washington, D.C. (Photo: Jean Marc Quinet/ZUMA Press/Newscom)

Listen here to the full podcast, which features an interview with Mona Charen and a discussion of a new study showing kids don’t play as much outside, or read the lightly edited transcript of the Charen interview below.

Katrina Trinko: Joining us is Mona Charen, the author of the new book “Sex Matters: How Modern Feminism Lost Touch with Science, Love, and Common Sense.” Mona is a columnist, a contributor to National Review, and a senior fellow at the Ethics and Public Policy Center.

Mona, first I wanted to touch on something you bring up in the intro to the book: Women aren’t happy. You note that women’s happiness has declined since the early 1970s, that women are significantly more likely than men to be on antidepressants. Is there a relationship between women’s dissatisfaction and feminism in your view?

Mona Charen: I think there is a connection because I think that one of the things that the feminist movement did is it removed something from the lives of women that’s very important to them, and that is security. Women need security because we are more vulnerable than men. We’re the ones who are smaller and weaker. We are the ones who have babies, who nurse babies. Security is very important to us. Because of the decline of marriage and the more raw, sexual environment that women are forced to live in now, there’s less security than there used to be.

Trinko: Interesting. As someone who hates being out of my comfort zone, I can relate to that. You also mentioned in the introduction to your book [Facebook Chief Operating Officer] Sheryl Sandberg’s “Lean In”. Obviously that’s an enormously influential book. It’s encouraged women to lean in to their careers, even if they’re having children—to essentially still be aggressive on the career front. What do you think about Sandberg’s advice and can women have it all?

Charen: Women can have it all, but not all at once. We are lucky that most of us can expect to live long lives, and there’s time enough to do everything in a sequential pattern, not necessarily all at once.

I also resist this idea of having it all because I believe that to be our fullest and best selves, we have to also focus on giving to others and not just living for ourselves. When I was a mother and when I was with my kids, I felt that I was where I really needed to be. That was a good feeling, and it made me happy. There was another part to your question about having it all. What was it?

Trinko: Well, women can have it all, but it sounds like you’re saying …

Charen: Yes, women can, but again, I would just push back a little bit on this idea of having as being the goal. I think we should all want to live rounded lives where we give and receive love to one another.

Trinko: Good. What do you think about sexual assault right now, particularly on college campuses? What is the right approach to this matter?

Charen: Well, conservatives have made a point of saying that the 1 in 5 or the 1 in 4 statistic is not true, and I agree, that is not. It’s an exaggeration, but I think conservatives have gone a little too far in stressing only the stories about mattress girl and others or the University of Virginia case, a rape on campus where they turned out to be hoaxes, because there really is a problem.

There really is a lot of very bad behavior going on. Conservatives should not be perceived as indifferent to the mistreatment of women or the rape of women. It is happening in numbers way beyond what should be tolerable.

That’s my plea is to take it seriously and begin to examine what is going wrong between the sexes. Why is there so much sexual assault? I point to a number of things, the hookup culture, the excessive drinking that characterizes dating life now (if you can even call it dating), and the confusion about sex where people aren’t getting clear signals about what is acceptable and what isn’t. The whole regime of so-called affirmative consent is confusing and unhelpful.

Trinko: Yeah, it seems like many of these people are saying, “Well, you didn’t read my signals.” It’s like, well, how could someone you’ve met a couple hours ago …

Trinko: … read your signals? Maybe the bigger question is why are you having this intimate activity right away?

Trinko: I make a point of trying to read a lot of feminist takes just to keep that in mind. Obviously the term toxic masculinity is used a lot.

Trinko: What do you think about that term, and in general, what should we be doing about the boys right now?

Charen: One of my critiques about feminism is that they have a tendency to disparage men as a sex. To say even the phrase toxic masculinity …

Imagine toxic femininity. Feminists would be up in arms if there were such a term being bandied about, much less whole courses about it in men’s studies departments. Look, men are human beings. They have strengths and weaknesses. Masculinity brings with it some serious problems, like aggression, like a huge sex drive that has to be controlled, but masculinity also brings with it a self-sacrifice, a willingness to be brave and to protect those who are weak and vulnerable.

One of the things that I cite in my chapter on this where I’m talking about toxic masculinity are the cases where for example, when that shooter entered the theater in Aurora, Colorado, no fewer than four young men covered their girlfriends with their own bodies to protect them.

Trinko: I did not know that.

Charen: You can say what you want about men and about masculinity, but that’s part of masculinity, that natural, self-sacrificing heroism.

Let’s be fair to men. If men have become very sexually aggressive and insensitive, maybe it’s because all of the rules about dating have been thrown out the window, and we live in a culture that is drenched in pornography and in which we are told that the old standards about courtship and dating are completely passe.

Trinko: Actually, you just mentioned pornography, and I think that’s something that we don’t really talk about very much publicly, which is interesting. You see that studies show that an enormous number of people are looking at it, including some women as well. How do you think that forms part of the problem between the sexes right now?

Charen: Yeah, exactly. I’m sorry, but it used to be that boys would think they were lucky if a girl would let him kiss her or touch her somewhere, right. Now boys are making these demands that women do things to their bodies to make themselves appealing that are totally unnatural and weird. Is this progress?

Trinko: Not in my view. A lot of conservative conversation focuses on what’s wrong with the current culture, but are there any positive ideas that could help women lead more fulfilling lives?

Charen: Absolutely. One of the things that I liked in the research for my book is that I’ve found there are countercultural movements afoot. There’s a professor at Boston College called Kerry Cronin who has assigned dating to her students and taught them how to ask someone out on a date and how to go out on dates. She gives advice in class about how to do it. The students support each other, and they’re very enthusiastic.

Under her rules, the students have to be home by 10 p.m. There can be no drinking on the date. It can’t be a movie because there has to be an opportunity for conversation. In any event, and they have to ask someone they’re genuinely interested in, not just a friend to get out of the assignment, I suppose. It’s just reintroducing these things, reintroducing the idea of romance. I think it might just catch on.

Trinko: Yeah, I think it might. It’s always interesting to me. I’m a bit older than a college student, but at the same time, it seems that so many people in the overall millennial generation are more comfortable being physical with a stranger than being verbally intimate.

Charen: Exactly. I said to one of my sons that they can’t protect their bodies, but they do protect their souls. They put up walls so that people can’t really get to know them.

Trinko: Absolutely. You see that a lot on dating sites. Now one critique I imagine the left would say about this book is that essentially it’s wanting to go back to the 1950s. Is that your ideal era?

Trinko: Let’s say you could wave a wand and change society. What does it look like?

Charen: If I could wave a wand and change society, I would change it to 2018 to the habits of people who are living right now but who happen to be college graduates. If you look at the patterns of dating and marriage and childbearing of the college graduate cohort in our society, you don’t have to go back to the 1950s, they’re doing it right now. Their patterns of finishing school, getting married, and having babies in that order, it hasn’t changed very much from the patterns that used to characterize everybody in the 1950s.

Some people say, “You want to go back to the 50s.” No, I just want all of our people in every income category, especially those at the bottom who need the support of families even more than the people at the top, to be able to benefit from having a mother and a father in the home, having two incomes, having that stability and that great start in life.

Trinko: OK, thank you very much, Mona. Again, she’s the author of the new book, “Sex Matters: How Modern Feminism Lost Touch with Science, Love, and Common Sense.” Check it out.