Highway Flagpoles Up Again After Veterans Complain About Removal 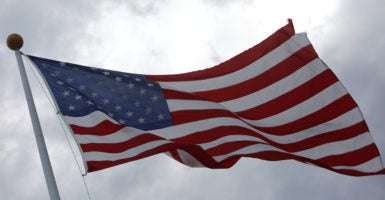 Veterans and other residents of the Rochester, New York, area weren't pleased when flagpoles located along a highway were taken down over "rigging and lighting issues." (Photo: Caro / Sorge/Newscom)

Flagpoles on a New York highway were restored  after hundreds of veterans and other community residents complained about their removal prior to a statewide American Legion conference.

The three flags originally flew along I-490 near Rochester, New York. Workers removed them July 13 because of “rigging and lighting issues,” according to a News10 NBC report.

Veterans and others, however, did not agree with the decision to remove the poles Monday instead of fixing them. Some volunteered to help maintain the area around the flag.

“We have discussed the possibility of having an outside entity or veterans’ organization take over the maintenance of these flagpoles in our right-of-way, however, it’s been determined that it would be too dangerous to do so,” state Department of Transportation spokesman Jordan Guerrein told News10 NBC.

“Like every decision we make here at NYSDOT, this boils down to the safety of not only our maintenance crews, but the traveling public,” Guerrein  said.

Lamb also questioned the state’s focus on removing American flags when it was supposed to remove “I Love New York” tourism signs that cost taxpayers over $8 million.

Monroe County Executive Cheryl Dinolfo, a Republican, said she was appalled by the removal of the flags.

New York state Sen. Joe Robach, a Republican, said he was “surprised that those [flagpoles] were taken down without any explanation,” according to the news station.

This is not the first community flap related to the flags.

Afghanistan War veteran Steve McAlpin said the flagpoles remained without flags for the past six to seven years because state transportation officials did not have time to maintain the flags monthly, News10 NBC reported July 5.

The state changed its mind and reportedly decided to reinstall two of the three flagpoles. It is searching for a permanent location to safely maintain all three flagpoles.