Liberal Professor Comes Out in Favor of Kavanaugh, Left Pounces 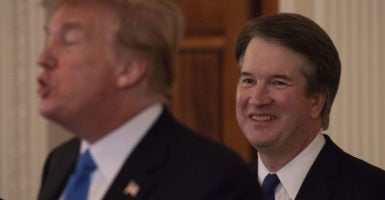 Predictably, President Donald Trump’s Supreme Court pick has been met with mostly hysteria on the left.

Stacking the Supreme Court with more unelected judges, they argued, was a necessary measure to save “democracy.”

It’s clear that whoever Trump nominated, most of the left would come out and define the pick as a threat to the republic.

The left-wing Women’s March was in such a rush to denounce the pick that they forgot to fill in the name on their press release claiming the nomination of “XX” is a “death sentence for thousands of women.”

Amid all of this hyperbole, there have been at least a few liberal voices arguing in favor of confirming Kavanaugh. The most prominent among them has been Akhil Reed Amar, a distinguished professor at Yale Law School who once taught Kavanaugh.

In an article he wrote for The New York Times, called “A Liberal’s Case for Brett Kavanaugh,” Amar made the argument that it was “Trump’s finest hour, his classiest move.”

Amar wrote that Kavanaugh’s credentials are beyond reproach, and that he has a “deep reverence for the laws and Constitution of the United States.” He even addressed the most common line of left-wing attack on Kavanaugh’s confirmation, that this seat was “stolen” from President Barack Obama’s choice, Judge Merrick Garland.

“Although Democrats are still fuming about Judge Garland’s failed nomination, the hard truth is that they control neither the presidency nor the Senate; they have limited options,” Amar wrote. “Still, they could try to sour the hearings by attacking Judge Kavanaugh and looking to complicate the proceedings whenever possible. … This would be a mistake.”

Ultimately, Amar wrote that if Democrats are serious about opposing the nominee, they should at least offer two better suggestions that would be acceptable to Trump and the Republican majority in exchange for frank answers from Kavanaugh about his views.

The nomination of Judge Brett Kavanaugh to be the next Supreme Court justice is President Trump’s finest hour, his classiest move https://t.co/vGhvSwB3mb

“Everything we have and everything we can imagine that is achievable within this crumbling system is at risk,” Blest concluded of the Kavanaugh nomination. “The Democrats are probably going to lose this fight, but anything less than a full-throated attack on Trump’s nomination is tantamount to capitulation on what might very well turn out to be the most consequential decision Trump ever makes.”

While the Splinter article reflects the mood of the progressive base, Amar’s defense of Kavanaugh as a candidate with unquestionable credentials and background means that it will be hard to go after him on anything other than partisan or ideological grounds.

It’s clear that what the left is most afraid of is any justice who will take textual adherence to the Constitution seriously.

The Federalist’s David Harsanyi summed this up perfectly:

Democrats were going to get hysterical about any pick, because any conservative pick was going to take the Constitution far too literally for their liking. For those who rely on the administrative state and coercion as a policy tool—forcing people to join political organizations, forcing them to support abortion, forcing them to subsidize socially progressive sacraments, forcing them to create products that undermine their faith, and so on—that’s a big problem.

In essence, they will oppose—and malign—any justice, no matter their background, gender, or religious beliefs, who will not aid in carrying out a progressive policy agenda.

Time will tell if this strategy of opposition at all costs will fly with the American people.