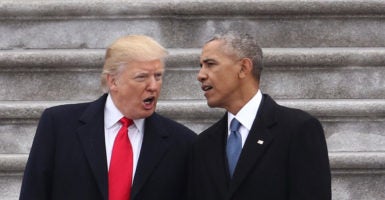 Over $20 million in taxpayer funds could be saved at the end of President Donald Trump’s first term in office due to his leaner White House operation.

A new report on the White House office personnel revealed that Trump has a significantly smaller staff than his predecessor did at this time, according to an analysis by Open the Books, a government watchdog organization that focuses on spending.

“Although the White House personnel budget is an infinitesimal part of the $3.9 trillion federal budget, it is an important forecasting indicator showing Trump’s deep commitment to cut the size, scope and power of the federal government and reign in waste,” wrote Adam Andrzejewski, CEO of Open the Books, in an op-ed for Forbes.

In addition to maintaining a smaller staff size, Trump’s White House has also cut payroll by over $5 million when compared to Obama’s 2015 staff. The 2018 payroll currently sits at $35.2 million, in contrast to the 2015 payroll, which Open the Books reported exceeded $40.9 million.

Open the Books also noted that by maintaining a smaller staff and by refusing to take a salary, Trump has already saved $11 million in taxpayer dollars, and “four-year savings could easily top $22 million.”

Among the various areas in the West Wing with reduced staff, the office of first lady Melania Trump is notable. Trump has a staff under half the size of then-first lady Michelle Obama’s in 2009. Trump currently has 10 staffers, while Obama had 24.