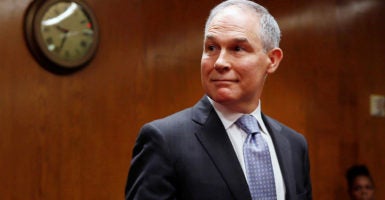 EPA Administrator Scott Pruitt arrives to testify before a Senate subcommittee hearing on the proposed budget estimates and justification for fiscal year 2019 for the Environmental Protection Agency on Capitol Hill in Washington, D.C., on May 16. (Photo: stringer/Reuters/Newscom)

Environmental Protection Agency Administrator Scott Pruitt cited “unrelenting attacks” against himself and his family in his resignation letter that was delivered to President Donald Trump on Thursday.

Pruitt thanked Trump for allowing him to serve at EPA, but says “the unrelenting attacks on me personally, my family, are unprecedented and taken a sizeable toll on all of us,” according to a copy of the letter obtained by The Daily Caller News Foundation.

…on Monday assume duties as the acting Administrator of the EPA. I have no doubt that Andy will continue on with our great and lasting EPA agenda. We have made tremendous progress and the future of the EPA is very bright!

Mr. President, it has been an honor to serve you in the Cabinet as administrator of the EPA. Truly, your confidence in me has blessed me personally and enabled me to advance your agenda beyond what anyone anticipated at the beginning of your administration. Your courage, steadfastness and resolute commitment to get results for the American people, both with regard to improved environmental outcomes as well as historical regulatory reform, is in fact occurring at an unprecedented pace and I thank you for the opportunity to serve you and the American people in helping achieve those ends.

That is why it is hard for me to advise you I am stepping down as administrator of the EPA effective as of July 6. It is extremely difficult for me to cease serving you in this role first because I count it a blessing to be serving you in any capacity, but also, because of the transformative work that is occurring. However, the unrelenting attacks on me personally, my family, are unprecedented and have taken a sizable toll on all of us.

My desire in service to you has always been to bless you as you make important decisions for the American people. I believe you are serving as president today because of God’s providence. I believe that same providence brought me into your service. I pray as I have served you that I have blessed you and enabled you to effectively lead the American people. Thank you again Mr. President for the honor of serving you and I wish you Godspeed in all that you put your hand to.

Pruitt also came under fire for flying first class, beefing up his security detail and renting a room in a condo owned by the wife of a prominent D.C. lobbyist. Democrats and environmentalists were joined by some conservative pundits in calling for Pruitt to resign.

However, most Republicans and conservative leaders stuck with Pruitt. Even Trump had supported Pruitt publicly despite concerns over mounting allegations.