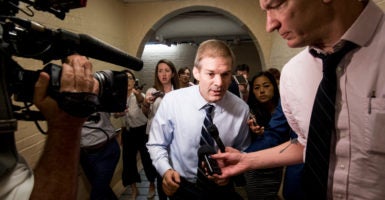 Former associates are coming to the defense of Congressman Jim Jordan amid accusations that the Ohio Republican ignored sexual-abuse scandals at Ohio State University while serving there as an assistant wrestling coach more than two decades ago.

“From the first day I met Jim Jordan as a student athlete, he has been the most honorable man I have ever known, and my respect and admiration for all he has done and accomplished is at the very highest level,” Russ Hellickson, former Ohio State University head wrestling coach, said in a statement provided to The Daily Signal.

Jordan, the co-founder of the conservative House Freedom Caucus and a potential candidate for speaker of the House, was an assistant wrestling coach at the school from 1986 to 1994. On Tuesday, he told Politico that he was not aware that Ohio State’s sports physician, Dr. Richard Strauss, allegedly molested hundreds of male student athletes. Strauss  who worked at Ohio State from the late 1970s to late 1990s, died in 2005. His death was ruled a suicide.

“It’s not true,” Jordan said. “I never knew about any type of abuse. If I did, I would have done something about it. And look, if there are people who are abused, then that’s terrible, and we want justice to happen.”

Jordan has represented Ohio’s 4th Congressional District since 2007 and was the first chairman of the House Freedom Caucus, a group of about 30 conservative legislators.

The Ohio lawmaker said in April that he would be “open to running” for speaker of the House when Speaker Paul Ryan, R-Wis., steps down at the end of the year.

Hellickson said that Jordan was a man of character who would not have ignored sexual misconduct had he been aware of it.

We dealt with many challenges together when he was one of my assistant coaches, and it’s important to know that neither Jim nor I would sidestep or avoid challenges for our wrestlers, just because the circumstances were painful or uncomfortable.

On April 5, Ohio State University announced that it was investigating the alleged actions of Strauss and the administrators of the wrestling program during Strauss’ tenure.

“The university recognizes and appreciates the courage and assistance of those in our community who have come forward and contacted the independent investigators about former university physician Dr. Richard Strauss, who was employed at the university from 1978-98 and died in 2005,” Benjamin Johnson, director of media and public relations at Ohio State, said in a statement provided to The Daily Signal.

“We are deeply concerned for everyone who may have been affected by his actions,” he said.

Johnson said the Ohio Attorney General’s Office appointed the law firm Porter Wright Morris & Arthur LLP as legal counsel for the university and that Porter Wright brought on Perkins Coie LLP to conduct an independent investigation of the matter.

“I recruited Jim Jordan out of Ohio to come to the University of Wisconsin in 1983,” Kemp, now a motivational speaker, said, “and it is hard for me to think of another person who embodies the character qualities of honesty, fairness, good judgment, and wisdom like Jim Jordan.”

Jim also never took shortcuts or ducked challenges. That’s not how he became a champion, so the idea that Jim would know of abuse of his wrestlers and do nothing is utterly absurd.

I first saw Jim Jordan’s tenacity in wrestling. America has seen how tenacious Jim Jordan is in Congress, and that same tenacity is exactly what Jim would have brought to [preventing] abuse of wrestlers in his charge if he had known about it.

The accusations against Jordan arose when Mike DiSabato, a former wrestler at Ohio State University, told NBC News in an interview that there was no way Jordan could not have been aware of the sexual misconduct.

“I considered Jim Jordan a friend,” DiSabato said. “But at the end of the day, he is absolutely lying if he says he doesn’t know what was going on.”

But George Pardos, a wrestler who Jordan coached, told The Hill that it would have been “out of character” for Jordan to have known about the abuse and done nothing.

“For Jimmy to know that this was going on and not do anything about it, it wouldn’t happen. It’s completely out of character,” said Pardos, a Marine Corps veteran. “I’ve had dinner at his house, worked out with him. This didn’t happen.”