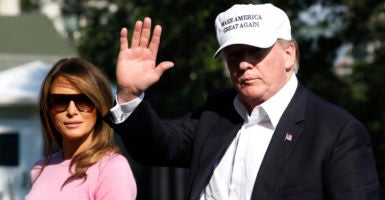 President Donald Trump walks with first lady Melania Trump on the South Lawn of the White House upon their return to Washington July 1 from Bedminster, New Jersey. (Photo: Yuri Gripas/Pool via CNP/ MEGA/Newscom)

As of July 2, the Senate has used the cloture rule to force at least 30 hours of debate on 101 Trump nominees. This is the second year of Trump’s first term. In contrast, the cloture rule was invoked a combined 32 times for nominees of Presidents George H.W. Bush, Bill Clinton, George W. Bush, and Barack Obama.

Just days away from Trump announcing a nomination to the Supreme Court, the pace of moving lower-level nominees will most assuredly slow even further.

It’s among the reasons that at this point, under 60 percent of Trump’s nominees have been confirmed to executive and judicial posts, while recent predecessors had 72 to 87 percent of their nominees confirmed by this point.

Trump has 145 nominees still awaiting a Senate vote and 162 nominees still in committee. While cloture—a procedure that requires 30 hours of debate—can’t block a vote from occurring (as a filibuster could), it delays a vote long enough to create a backlog of nominees.

The slow pace of filling government posts has plagued Trump since early in his administration. Supporters say the president needs his team even in mid-level government jobs to implement his policies. Democrats have blamed other factors such as high turnover in the administration and slow pace of making nominations for the vacancies.

For the entirety of his first term, Obama faced 17 cloture votes over nominations. George W. Bush faced just four during his first term, Clinton 10 in the first term, and George H.W. Bush only one in his four years in office.

Among the examples the White House called “unnecessary cloture votes” were Jelena McWilliams to serve on the board of the Federal Deposit Insurance Corporation, and lower court federal judges, each who had to go through maximum debate before passing by a unanimous voice vote.

Cloture is the only formidable weapon for a Senate minority since the decline of the filibuster, which began in 2013. That’s when Democrats controlled the Senate and killed the standard that 60 votes are needed to end a filibuster and proceed to a floor vote on lower court and executive branch nominees. As a result, most of Obama’s nominees could be confirmed by a 51-vote majority.

When the Senate Democratic minority in 2017 tried to block confirmation of Trump’s choice of Neil Gorsuch for the Supreme Court, Republicans did away with the 60-vote standard for all judicial nominees. So, all presidential nominees may advance with 51 votes, rather than a filibuster-proof 60.

Unlike a filibuster, which allows a minority to block a floor vote, cloture uses procedural tactics to prolong the confirmation process so much that it limits the number of nominees who may reach the floor for a simple majority vote.