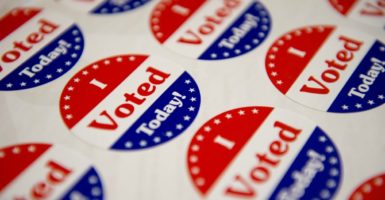 Stickers are seen at a polling location during the Pennsylvania primary in Philadelphia on April 26, 2016. (Photo: Kevin Dietsch/UPI/Newscom)

Last year, Cassandra Amber Marie Ritter was convicted of heroin distribution in Winchester, Virginia. Two weeks later, Ritter voted at a local fire department even though she knew she had lost her right to vote as a consequence of her conviction. She received a two-year suspended sentence.

In Texas, Crystal Mason recently received a five-year sentence for illegally voting in the 2016 presidential election.

Mason showed up at the polls to vote, only to discover her name had been removed from the rolls. This was no accident; Mason was on probation following a 60-month sentence for felony tax fraud and lost her right to vote as a result.

Texas law requires felons to serve their entire sentence—including probation—before their voting rights are restored. Though Mason claimed she was unaware of this, she did sign an affidavit at the polls that affirmed her eligibility, including a statement that she was not a felon who had yet to serve both her sentence and probation.

More convictions out of Texas may be on the way. The Justice Department recently indicted a Salvadoran national whom it alleges entered the United States illegally, falsified his identity, and wrongfully voted in the 2016 election despite being a noncitizen.

These cases demonstrate the increasingly serious problem of individuals ignoring voter laws and cheating the system—and the need for states to take seriously their duty to maintain the integrity of the electoral process.

Contrary to the left’s claims that election fraud is a non-issue, there is substantial evidence that voter fraud not only is real, but affects the outcome of elections throughout the country. Indeed, The Heritage Foundation’s voter fraud database details 1,132 proven instances of fraud in 47 states and is regularly updated; the database shows irrefutably that voter fraud is a real issue worthy of mitigation.

The Heritage database is by no means comprehensive. Many instances of voter fraud simply go undetected because states do not have adequate procedures to uncover them. Others are never investigated. Indeed, several years ago New York’s Moreland Commission on Public Corruption found the state’s Board of Elections frequently ignored allegations of voter fraud and left cases lingering, sometimes for years.

When states do not take election integrity seriously, there are consequences. Ineligible voters casting illicit ballots nullify others’ votes, essentially disenfranchising them. And though many on the left insist that nothing short of millions of unlawful ballots merits attention, in reality, a handful of ballots, or even a single illegal vote, can alter the outcome of an election. When this happens, the public’s faith in the democratic process itself is shaken.

That’s why it is critical that states adopt election integrity measures designed to detect and deter fraud. These measures include cleaning up the voter rolls to ensure they accurately represent eligible voters in a jurisdiction; voter identification requirements to verify eligibility and citizenship; and interstate cross check programs to weed out duplicate registrations.

Many on the left oppose these policies because they say such laws are intended to discriminate against racial minorities.

In that case, the 5th Circuit upheld a Texas law enforcing photo identification requirements and rejected claims the state was intentionally discriminating against minorities. There was no evidence to support such a claim, and Judge Edith Jones stated that such accusations “rel[y] on incorrect presumptions of taint and invalidity … presuming, without proof” that these measures were implemented based on “invidious intent.” In fact, as Heritage scholar Hans von Spakovsky showed in a study, minority turnout increased after Texas adopted voter ID.

Similar allegations of racial discrimination were leveled against Ohio’s voter roll cleanup law, which was recently upheld by the Supreme Court. As Justice Samuel Alito, writing for the majority, pointed out, there is a dearth of evidence that Ohio “carried out its program with discriminatory intent” and chalked up much of the opposition to it as a “policy disagreement” outside of the proper scope of judicial authority.

Clearly, as the 5th Circuit and the Supreme Court have demonstrated, the left’s argument that election integrity is a smoke screen for discrimination is fallacious. And as the Heritage database—and the Ritter and Mason cases—prove, election fraud is a real issue meriting a serious policy response.

Elections are the pathway to political power in America. So long as that is true, there will be a powerful incentive to rig results to guarantee victories. The failure of states to adopt and vigorously enforce election integrity measures only encourages voter fraud, ultimately blemishing the entire electoral system and harming the credibility of its results. This does a disservice to the American people.

One of the greatest gifts of American citizenship is political participation—and that gift is short-circuited by the left’s belittling of the importance of election integrity.