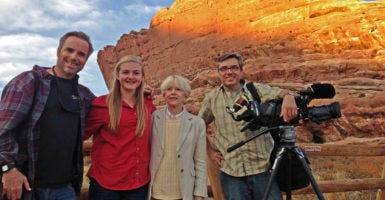 Diane Preston-Reilly says she has received many touching letters about her TV show “The Real Winning Edge,” which profiles young adults who overcome adversity through faith.

But after 10 years of producing the faith-based show, one letter in particular sticks out in her mind, and she never will forget it, Preston-Reilly tells The Daily Signal in an interview.

In response to an episode about a teenage boy who almost committed suicide, a mother from Staten Island, New York, wrote to ask permission to bring a copy of the show to her local high school for students to see.

“She put two and two together,” Preston-Reilly recalls the school mom writing, “and [she] said, ‘This is what all kids should see … We have just been reeling from the fact that we had a young lady who threw herself in front of a subway [and] was killed. She was just miserable because the kids bullied her so much.’”

This child had no one to talk to or to discuss her problems. I feel that there are many students that feel this way and have no one to look up to or be guided by an inspirational person. … I wouldn’t want any other students feeling the only way out is to commit suicide.

Preston-Reilly says she immediately granted permission for that episode of “The Real Winning Edge” to be shown at the Staten Island high school.

“I cried,” she says of the woman’s account of how the show helped the dead girl’s fellow students. “I’ve kept that letter to show others as the suicide rate has continued to increase.”

Preston-Reilly is founder and president of Challenger Films, which produces “The Real Winning Edge.”

She grew up as a child model and did commercials in Pittsburgh and, later, New York City during her college years. She says her interest in media grew from her exposure to the manipulative tactics used by the media to make money.

After getting a doctorate in education, Preston-Reilly became a teacher and witnessed how violent television shows during the 1980s influenced her students’ perspectives.

“I wrote a thesis [in graduate school] on how TV and films affect social values,” she says. “It’s scientifically proven that there is a direct correlation between watching violence and becoming desensitized towards it. We learn through repetition.”

A self-taught filmmaker, Preston-Reilly says the idea to create “The Real Winning Edge” came to her after she dreamed she saw those words as a cross approached her from far away. She wanted the show to be an alternative to violent entertainment.

“What we watch shapes our culture,” she says. “What we have created with our allowing of the young people to watch violence constantly now is that you have created young people who think violence is the way to solve their problems.”

After creating a pilot episode of the show in 1982, Preston-Reilly says, she shopped it around to regional broadcast stations for nearly 30 years. Among the challenges, what she calls “boulders,” was backlash because the show is anchored in Christianity.

Opportunity opened up in 2008 when a nationally known politician, someone Preston-Reilly says wants to remain anonymous, got her through the door at Fox Broadcasting Company’s digital operations. She landed a contract to produce a series and reach a secular audience.

She attributes this development and her success to her own “real winning edge”: prayer.

“I got on Fox not just because of knowing the right person. I got on Fox because I got what the Lord showed me to do,” Preston-Reilly says, recalling a two-year search for a person to pray for her show in every state.

“The moment I had somebody in all 50 states representing ‘The Real Winning Edge’ in prayer, that is when I had the doors open on national television.”

The show now airs on Fox-owned stations and others, often on Saturday mornings. In two- to three-minute episodes, “The Real Winning Edge” profiles a range of stories, from a one-legged girl in North Dakota who became a championship tennis player to a football player who became “the Tim Tebow of his team” after God spoke to the young man as he questioned his faith while mowing the lawn.

The show’s Facebook page describes “The Real Winning Edge” this way: “A faith-inclusive national TV show featuring video profiles of student achievers in sports and the arts overcoming life adversity by making wise choices, having faith, and winning in life.”

As young adults have shifted their attention from television to online, “The Real Winning Edge” followed with episodes premiering not only on Fox-owned stations but on JUCE TV and a new YouTube channel.

Preston-Reilly says she sees her show as an “in-between” or a stepping stone that encourages youth to seek God and attend church by showing them stories that inspire. She is working with high schools and universities throughout the country to spread the word about “The Real Winning Edge” as well as to find more students to profile.

As for the name of the show?