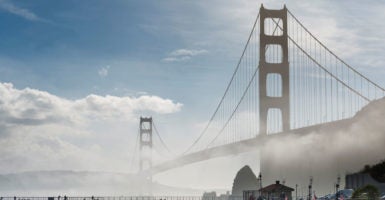 As the Supreme Court strikes blows against compelled speech and restrictions on free speech, California is doing its best to resist.

One of the latest legislative proposals from California aims to make government the arbiter of truth.

Senate Bill 1424 would create an advisory group on “fake news” to work with social media companies to weed out what the government deems incorrect information on the internet.

This legislation, if passed, would require California’s attorney general to create the  group, consisting of “social media providers, civil liberties advocates, and First Amendment scholars,” to study and mitigate the problem of spreading false information.

According to CBS Sacramento, even the Electronic Frontier Foundation, a left-leaning nonprofit civil liberties organization, called the legislation “flawed” and “misguided.”

This bill mirrors the trend in Europe, where government commissions to police speech and the news are becoming common.

California, emboldened by a stridently progressive Legislature, is trying to bring these Orwellian fake news panels to the United States.

Americans should leave this trend to the other side of the Atlantic.

The Founding Fathers were well aware of both the strengths and limitations of the press. While fake, misleading, and dishonest news was as common in their day as in ours, they understood that containing speech through governmental force was a dangerous proposition.

As Thomas Jefferson wrote in a letter:

Truth is an elusive thing, but Jefferson and most of the Founders concluded that the arbiter of this truth was best left in the hands of the people.

Because the Founding Fathers knew that the people could also be wrong in their judgment, they created mediating institutions—diffused power among the branches of government and the states and the courts, to name a few—to check the power of pure democracy as well.

Creating a government panel with the power to determine what news is real or fake flies in the face of what the Founders attempted to create for America, and almost certainly will run afoul the First Amendment.

Of course, California is getting used to these assaults on First Amendment freedoms.

As Justice Anthony Kennedy said, in one of his last Supreme Court opinions before retirement, the California Legislature’s self-congratulation about being “forward-thinking” in its official history runs counter to the fact that it has become hostile to the timeless idea of free speech.

Kennedy said it isn’t forward-thinking to “be an instrument for fostering public adherence to an ideological point of view [they] fin[d] unacceptable.”

Kennedy was referring to a case in which California’s government would force pro-life pregnancy centers to advertise low-cost abortions.

Using those same levers of government to curate the internet is hardly better, and it brings up the question: Can a government that would force citizens to promote a point of view they find abhorrent be trusted to judge what’s true and false in the public debate?

Of course not, and nor should citizens trust any government with that kind of power.

We should be thankful that our Founding Fathers understood this and created the First Amendment, which is a shield, not a weapon.

However, that doesn’t make California’s relentless attempts to subvert freedom of speech under the cloak of good intentions any better.

It just means that Americans can’t become complacent; the courts won’t always step in and resolve our problems.

California’s version of the Ministry of Truth isn’t forward-thinking, it’s akin to something out of George Orwell’s dystopian novel, “1984.”

Americans would do well to continue embracing our legacy of freedom and treat government control over media with the scorn it deserves.