What Congress Can Do to End Suffering at the Border 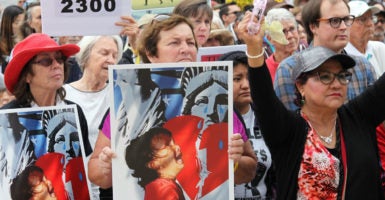 It is a searing image. A toddler in pink shoes, a pink jacket, and jean shorts staring up at her mother, who is talking to a U.S. Border Patrol agent. She is afraid. She is in tears.

She could be any of our daughters.

This young girl quickly became a symbol for opposition to President Donald Trump’s “zero tolerance” policy of prosecuting all illegal border crossings. That policy, due to a 1997 federal court decision, also necessitates separating parents from children when families are arrested for crossing the border illegally.

Millions of Americans were horrified by the image of the crying girl in pink, as well as many similar images that came out over the past week. Progressive activists claimed that the thousands of Central American migrants crossing the border illegally were fleeing gang violence in their home countries.

This is a compelling argument. No one wants to separate families—ever. We also desperately want to help families fleeing violence in their home countries. And Trump did issue an executive order Wednesday announcing his intention to challenge the federal court decision that requires children to be separated from their parents if the parents are detained for longer than 20 days.

But not all of the story that progressives are telling about the border crisis is true.

Turns out the girl in pink, who has since been put on the cover of Time magazine, was never separated from her mother. Furthermore, it turns out her mother was not fleeing Honduras because of violence at all.

Her husband says the woman paid a human trafficker $6,000 to smuggle her and her youngest daughter (she has two other children) to the United States because she “had always wanted to experience the American dream.” Life in Honduras was “fine but not great,” the husband told the Daily Mail, adding, “It’s hard to find a good job here and that’s why many people choose to leave.”

Now no one can blame a mother for trying to better the life of her child. But seeking better economic opportunity is not a valid basis for refugee status. And the number of migrants coming from Central America claiming asylum has skyrocketed.

According to data from the Justice Department, the number of asylum claims from Honduras, Guatemala, and El Salvador increased 234 percent between 2014 and 2016. More individuals applied for asylum from these three countries in those years than in the preceding 17 years combined.

Why are so many thousands of Central Americans paying smugglers to bring them to the U.S. to apply for asylum if so few of them are granted asylum?

Because they know if they can just get into the country, our border law enforcement infrastructure has been so overwhelmed that it is highly likely they will be released into the country. And then they can skip their court date and just wait for a Democratic president to grant them amnesty or deferred action status.

This is not an acceptable or humanitarian outcome. It only creates more heart-wrenching scenes like the one depicted on the cover of Time magazine.

It is time for Congress to act. We can’t fix this problem entirely, but we can definitely start to make it a little better.

These bills, if passed, will not solve our immigration crisis entirely. But they would allow for more humane law enforcement at our nation’s border. We would all be able to sleep easier knowing that parents will not be separated from their children.