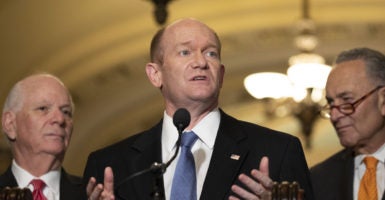 A Senate panel approved legislation that includes a 1.9 percent pay raise for civilian federal employees, even though the White House wants to give raises only when employees deserve them.

“I also appreciate that the bill includes a well-deserved pay adjustment for federal civilian workers,” Delaware Sen. Chris Coons, the ranking Democrat on the committee, said in a statement.

After President Donald Trump granted a 1.9 percent pay increase in 2017 rather than a much higher salary bump, the White House suggested a total pay freeze for civilian government workers in February. In lieu of an automatic pay increase for all employees, the Trump administration suggested a $1 billion fund to reward high performers with incentive salary increases.

The fund would “replace the across-the-board pay raise that provides federal employees with increases irrespective of performance with targeted pay incentives to reward and retain high performers and those with the most essential skills,” a fact sheet accompanying the president’s 2019 budget request stated. By not including the workforce fund in appropriations bills, the Senate and the House of Representatives both signaled a rejection of the idea.

“This is a responsible bill that boosts our national economy, financial security, and government accountability, and I urge the Senate to pass it without delay,” Sen. James Lankford, R-Okla., subcommittee chairman, said of the bill text.

While the 1.9 percent pay raise would apply across the federal government, the bill does include language to prevent Internal Revenue Service employees from giving bonuses to employees “unless employee conduct and tax compliance is given consideration.”

“I’m pleased that we are moving forward on the appropriations process,” Lankford said. “Orderly and transparent appropriations is a core responsibility of Congress, and a place where significant government reforms can be implemented.”