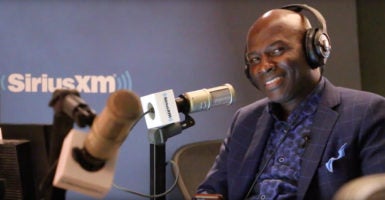 After more than two decades on the radio, commentator Armstrong Williams will sign off his show on SiriusXM Urban View for the last time June 27 to devote more time to expanding his TV holdings.

“When you own broadcast television stations, and it’s a 24/7 business, it requires the weekdays to visit these stations, to be involved in an operational, detailed way,” Williams told The Daily Signal in an exclusive interview, adding:

You can’t just schedule everything on the weekends. I’ve tried it. I’ve made it work. I can make it work now, but now that we are expanding to three more television stations … I just realized I would be spending many days away from the radio. It’s not fair to the audience. It’s not fair to Sirius.

Williams, president and CEO of Howard Stirk Holdings, a multimedia company that now owns 11 TV stations, said he will continue his syndicated TV program, “The Armstrong Williams Show,” and his podcast distributed by Apple, “The Strongcast.”

The Daily Signal carries Williams’ syndicated column, which is distributed by Creators Syndicate.

Williams, 56, a longtime conservative voice on the Washington scene, was an aide to Supreme Court Justice Clarence Thomas when Thomas ran the Equal Employment Opportunity Commission from 1982 to 1990.

More recently, the South Carolina native was a surrogate for the presidential campaign of Ben Carson, the retired neurosurgeon who is now secretary of the Department of Housing and Urban Development.

Williams began making regular media appearances in 1991 to advocate Senate confirmation of Thomas to the Supreme Court after President George H.W. Bush nominated him. This led to a column in USA Today, which led to radio shows beginning in 1995.

For almost 10 years, “Armstrong Williams” was carried by SiriusXM Urban View, Channel 126, which the conservative talker calls his favorite experience.

“It was a real audience, real diversity, and real listeners. No doubt,” Williams told The Daily Signal, adding:

No matter where I traveled across the country, if people had never seen my face before, if I would just start talking, people would start running up and say, ‘You’re Armstrong. I know your voice. I listen to you.’ And, especially, the truck drivers. If I’m at a pit stop and at the counter and I start talking … just a lot of great memories.

Williams was close to former South African President Nelson Mandela and his wife, Winnie Mandela. In 2013, his show was the first to break the news of Nelson Mandela’s death, Williams said.

Politico published a story that was critical of the relatively low price Williams paid Sinclair for the three stations. However, he has been host of a syndicated TV program on Sinclair stations. Williams said he sees no reason for controversy.

“If you don’t grow, you will die. That is why I have to continue to buy stations,” Williams said. “When you think about the content budgets of major platforms such as Comcast, Hulu, Netflix, we are not even in the competition. We are not even close to being competitive.”

Williams said his radio show has been 40 percent politics and 60 percent about life issues from personal finance to mental illness. Politics is highly polarized, he said, but his show wasn’t.

“It was a civil show. Understand, 80 percent of our audience was liberal,” Williams said. “It was the only chance I had to really talk to American blacks, to really exchange ideas and perspectives. We grew together.”

Still, he said he finds a lot of support for the president from his audience.

“At least 35 percent of our listeners support Trump. It’s amazing,” Williams said. “It’s consistent. I don’t have to look at polls. I hear it every night on the radio, and they are strongly supportive.”