The Value in Learning the Army’s History 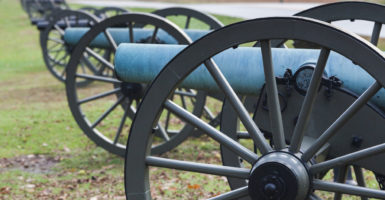 On this day, soldiers past and present will be encouraged to pause and reflect on the years of service the Army has given the nation.

The Army takes enormous pride in its history and heritage. The Second Continental Congress created the Army on June 14, 1775, when it authorized the formation of 10 companies of expert riflemen. These brave soldiers marched to Boston to support the local militia.

The next day, George Washington received his appointment as commander in chief and shortly moved to take command at Boston.

Army Maj. Gen. Malcolm Frost recently announced a renewed focus on Army history in basic training with the goal of teaching recruits “what it means to be a United States soldier” and to connect them with the service’s heritage.

Why should new soldiers understand the Army’s history? After all, the average American citizen knows very little about our history: According to a CBS News poll, in 1994 only 27 percent of Americans knew what the term “D-Day” refers to. A 2014 National Assessment of Educational Progress report revealed that only 18 percent of eighth-graders were proficient in U.S. history.

So why should the Army expect its soldiers to learn its history? What’s the point of teaching soldiers about the miserable conditions at the encampment at Valley Forge, Pennsylvania, or the D-Day assault on Omaha Beach, or the sacrifices by Gary Gordon and Randy Shughart in Somalia in 1993?

Why not listen to those who say to “live in the moment” and just carry out orders? What do modern soldiers have to learn from the battles and soldiers of the past?

It turns out, a lot. By understanding the actions of fellow soldiers and how they reacted and persevered under the most challenging of circumstances, today’s soldiers can be guided by their experiences.

Sgt. Alvin York’s single-handed attack on German machine gun nests in WWI provides a classic example of bravery in the face of danger. Gen. Ulysses S. Grant, after having been nearly defeated on the first day of the Battle of Shiloh in the Civil War, told his subordinate William Sherman that night that they would “lick ‘em tomorrow,” demonstrating great perseverance.

And Shughart and Gordon repeatedly insisted on being inserted in the midst of a raging firefight in downtown Mogadishu to help a downed aircraft crew. Their choice, which resulted in their deaths, provides a vivid example of how soldiers never leave fallen comrades.

Lessons like these are hard to learn in peacetime. But through understanding Army history, soldiers better prepare themselves for the unforgiving crucible of combat.

Throughout its 243 years of history, the Army has never failed to answer the nation’s call. The Army flag has 190 campaign streamers attached to it, each attesting to tough campaigns and battles.

Some struggles have ended in defeat, like the 1776 Long Island campaign in the Revolutionary War. Others, success, like the 1991 liberation and defense of Kuwait. Steadfast through it all have been the determination, devotion, and the readiness of the American soldier, captured by the Army’s motto, “This we’ll defend.”

Happy Birthday to the Army.