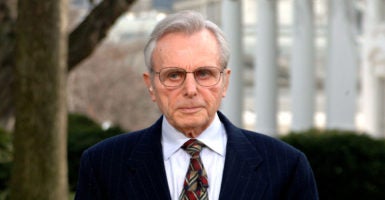 Luc Sasseville is a member of the Young Leaders Program at The Heritage Foundation.

Frank Carlucci III, who served under every president from Richard Nixon to Ronald Reagan, died June 3 at his home in McLean, Virginia. He was 87.

Carlucci, who dedicated much of his adult life to serving the American people and became well-known for his bravery, conservatism, and problem-solving approach, served as the 15th national security adviser and the 16th secretary of defense.

After graduating from Wyoming Seminary in 1948 and Princeton University in 1952, Carlucci served as a Navy officer from 1952 until 1954, studied for a year at Harvard Business School, then joined the State Department in 1956.

He served for 12 years at the State Department in outposts such as Congo, Zanzibar, and Brazil and distinguished himself during the Congo Crisis of 1960, when he helped save a carload of Americans from the clutches of a Congolese mob and received several stab wounds in the process.

Under President Gerald Ford, Carlucci served as ambassador to Portugal, where he is credited with preventing Lisbon from falling into the hands of communists.

Carlucci was deputy director of the CIA under President Jimmy Carter from 1978 to 1981, then served as deputy secretary of defense and later national security adviser in the Reagan administration, where he worked to restore confidence in an administration badly shaken by the Iran-Contra affair and abolished Lt. Col. Oliver North’s political-military affairs section, the body responsible for the covert plot involving the Nicaraguan Contras and arms sales to Iran.

Then, when Weinberger resigned amid the Iran-Contra affair in 1987, Carlucci succeeded him as the secretary of defense, where he oversaw $33 billion in budget cuts, closed numerous domestic bases, and maintained American strength abroad.

Carlucci believed, as did Reagan, in peace through strength and advocated the buildup of American arms as a way to end the Cold War. He backed both the space-based missile defense program and arms control agreements with Moscow, testifying to his level-headed approach to problem solving.

After his retirement from public service in 1989, Carlucci moved to the then-new Carlyle Group, a private equity firm that focused on defense spending, among other things, and built it into a successful enterprise. He later became its chairman and then its chairman emeritus in 2003.

Carlucci is survived by his second wife, Marcia McMillan Myers, as well as two children from his first marriage, a daughter from his second marriage, a sister, and six grandchildren. He was known as a master of good judgement, with excellent managerial skills, and common sense.

We honor his memory and his life, which he so nobly and effectively placed in the service of our country.