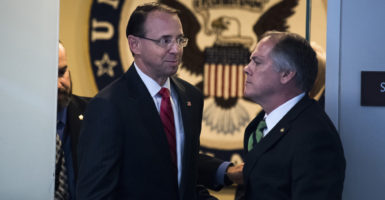 The indictment of a top Senate staffer in a leak investigation touched off more concerns about politicized leaking of what is supposed to be secret government information.

A federal grand jury in Washington indicted James A. Wolfe, 58, the director of security for the Senate Select Committee on Intelligence, for lying to FBI investigators in the course of a leak investigation.

Wolfe’s job was safeguarding all classified information in the possession of the committee, according to the Justice Department.

“These leaks shouldn’t be happening. This was not a case of a whistleblower, but an actual violation of security protocol,” said Sidney Powell, a former federal prosecutor who was the chief of the appellate divisions in the Western District of Texas and Northern District of Texas. “This is a government employee entrusted with national security secrets and [he] apparently had no hesitation about leaking them and then lying about it.”

The leaks appeared to be based on politics and aimed at harming President Donald Trump, said Powell, author of “Licensed to Lie: Exposing Corruption in the Department of Justice.”

Classified information must be protected from being publicized from either members of Congress or their staff, said Hans von Spakovsky, senior legal fellow with The Heritage Foundation.

He noted that in the 1980s, Sen. Patrick Leahy, D-Vt., resigned from the Senate intelligence committee over leaking classified information about the Iran-Contra investigation.

“The indictment is important from the standpoint of making sure that Congress doesn’t leak classified data,” von Spakovsky, a former Justice Department lawyer, told The Daily Signal. “Being a Senate or House staffer shouldn’t carry immunity from leaking.”

The indictment alleges that Wolfe in December 2017 lied about his communications with three journalists, including through his use of encrypted messaging applications. The indictment also accuses Wolfe of making false statements to the FBI about providing two reporters with non-public information related to matters before the committee.

“Mr. Wolfe’s alleged conduct is a betrayal of the extraordinary public trust that had been placed in him,” said Jessie Liu, U.S. attorney for the District of Columbia. “It is hoped that these charges will be a warning to those who might lie to law enforcement to the detriment of the United States.”

Wolfe was arrested June 7. The case has been assigned to Judge Ketanji Brown Jackson, an Obama appointee, in the U.S. District Court for the District of Columbia.

One controversial aspect in building the case was that federal authorities seized emails and phone records of New York Times reporter Ali Watkins, who was in a relationship with Wolfe.

The Times touts Watkins for breaking key stories on former Donald Trump campaign aide Carter Page, and she was the first to report the name of Olga Vinogradova, the Russian woman who former Trump adviser George Papadopoulos met in 2016.

“There should definitely always be a very high bar in this situation,” Powell, the former federal prosecutor from Texas, told The Daily Signal. “This could have a chilling effect whether the search was warranted or not.”

The Justice Department has rules for obtaining information from the news media, Powell said,  and “the approach in every instance must be to strike the proper balance among several vital interests: Protecting national security, ensuring public safety, promoting effective law enforcement and the fair administration of justice, and safeguarding the essential role of the free press in fostering government accountability and an open society.”

Trump said the indictment “could be terrific,” but acknowledged competing interests.

Trump later added that leak indictments can be a “double-edged sword.”

The Justice Department’s seizing of the reporter’s communications “sends a terrible message” and is a law enforcement tactic that should be only a “last resort,” said Bruce Brown, executive director of the Reporters Committee for Freedom of the Press.

“We call on the Justice Department to explain how its actions adhered to its own guidelines for protecting newsgathering from exactly these kinds of damaging intrusions,” Brown said in a public statement. “These rules protect the public’s interest in allowing journalists to report on what’s happening inside the government without fear of being investigated.”

However, von Spakovsky contended that freedom of the press doesn’t create a separate tier of the law.

“The Justice Department has very specific rules and [they] are very careful about going after reporters’ information,” von Spakovsky said. “There is nothing in the Constitution that gives the press immunity from publicizing classified information any more than the rest of us.”