Ben Carson Discusses Role of Faith in His Career as Neurosurgeon 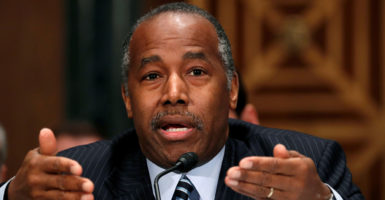 HUD Secretary Ben Carson said his attitude toward his profession as a neurosurgeon was “Lord, you be the neurosurgeon, and I’ll be the hands.” (Photo: Kevin Lamarque/Reuters/Newscom)

Secretary of Housing and Urban Development Ben Carson addressed the annual Road to Majority conference Friday, emphasizing the importance of faith in people’s lives and his own.

The neurosurgeon-turned-politician told the assembled crowd at the Faith and Freedom Coalition’s conference that during his time as a neurosurgeon, he used to think he alone was accomplishing the medical breakthroughs that he was, but the faith of another family led him to see it differently.

The HUD secretary related a story where a family with a young son came to him at Johns Hopkins Hospital in Baltimore, Maryland, where he was then the director of pediatric neurosurgery. The child had a tumor on his brain stem, and Carson said that he and the other doctors didn’t believe anything could be done.

But it was the faith of the young boy’s parents that struck Carson as they continued to tell him, he recounted, that “God is going to heal our son, and he is going to use you to do it.”

Some time later, Carson said, the little boy came back and had gotten noticeably better, although the tumor was still present.

“Long story short,” Carson said, “that little boy walked out of the hospital and today is a minister.”

Carson revealed that it was then that he realized how “it was God all along,” and said from then on his attitude was “Lord, you be the neurosurgeon, and I’ll be the hands.”

The former 2016 presidential candidate touted the many regulatory reforms the Department of Housing and Urban Development had enacted since he had taken office as the department’s 17th secretary, saying that “the new HUD has [an] emphasis on self-sufficiency.”

“That’s the real compassion,” Carson said, adding that “one of the reasons we accelerate so quickly in the world is because we are people of faith.”