How to Empower the Labor Department Office That Fights Union Corruption 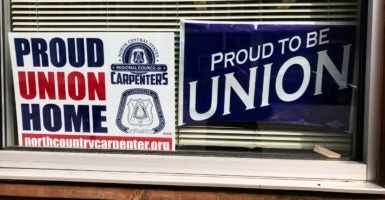 Afraid of what it might find if it looked too closely at union ledgers, the Obama administration willfully neglected the Department of Labor’s Office of Labor-Management Standards, which fights union corruption and helps to ensure that union elections are free and fair. (Photo: Tim Reid/Reuters/Newscom)

Richard McCarty is the director of research for the Americans for Limited Government Foundation.

For too long, many union members have been kept in the dark about their union’s finances. Some unions are run in a transparent, democratic manner, but many others are run autocratically with minimal transparency and accountability.

This lack of transparency too often allows unscrupulous union officials to embezzle or misuse union funds; and each year, the federal government prosecutes scores of these officials for their crimes.

Afraid of what it might find if it looked too closely at union ledgers, the Obama administration willfully neglected the Department of Labor’s Office of Labor-Management Standards, which fights union corruption and helps to ensure that union elections are free and fair. Congress should address the agency’s lack of resources as soon as possible, and the Trump administration should make a series of changes at the agency to promote union transparency.

With a budget of less than $38 million—and $10 million less than it was a decade ago—and a staff of less than 200 full-time employees or equivalents, the Office of Labor-Management Standards simply does not have sufficient resources to match its huge task of protecting the billions of dollars in assets collectively owned by millions of union members.

Once inflation is factored in, the situation is obviously worse. Just to bring the agency’s budget back to parity with the fiscal year 2007 budget level, funding would have to be increased to more than $59 million, which is significantly more than the $46.6 million the administration requested for fiscal year 2019.

It might sound odd for the Americans for Limited Government Foundation to advocate more funding for a government agency, but there are several good reasons to do so.

First, law enforcement is a core function of government. Second, the Obama administration’s neglect of the office had a dramatic effect—the number of union audits, investigations, indictments, and convictions all declined.

Under President George W. Bush, the Labor Department worked on several union transparency regulations that were rescinded or not enforced by the Obama administration. With President Barack Obama gone and new Labor Department leadership in place, now is the time to reinstate those regulations and address the following issues:

By reinstituting and enforcing transparency regulations and conducting more union audits, the Office of Labor-Management Standards can help ensure union members’ funds are protected and that members have access to detailed financial information to help them determine whether their union’s leadership is competent.

To enable the agency to properly enforce labor law, Congress must significantly boost funding and staffing to compensate for the years of neglect under Obama.

The Trump Labor Department has done a good job of rolling back a number of Obama’s harmful policies, but more work remains to be done by both Congress and the administration to improve union transparency and fight corruption.