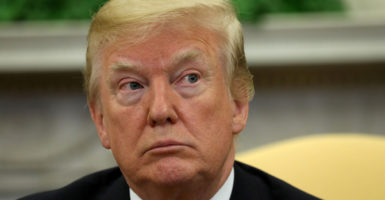 In an under-the-radar move before Memorial Day weekend, President Donald Trump signed a series of important executive orders that could speed up “draining the swamp” in Washington.

The executive orders adjust rules pertaining to federal workers so that it now will be easier to get rid of bad employees in a shorter amount of time.

The orders also limit the time federal employees may devote to union organizing during work hours. And they set up a shorter time for negotiating contracts in the collective bargaining process.

Over the last century, civil service rules have made it increasingly difficult, if not impossible, to fire bad bureaucrats.

While the original civil service reforms in the late 19th century were meant to increase merit hiring and move away from the politicized “spoils system” of earlier eras, the current system locks workers into government jobs for life, regardless of merit.

Unaccountable agencies guided by a permanent class of federal workers have been given free rein in this country.

These tweaked rules, following changes at the Department of Veterans Affairs—which has been wracked by scandal in recent years—represent a positive step in the right direction of making that vast apparatus more answerable to the American people.

However, civil service reform has its vociferous detractors.

Wednesday, Cox’s union sued Trump over the limits on doing union business on the taxpayers’ dime.

Here are three frequent but mistaken claims made by critics of civil service reform.

1. Making It Easier to Fire Bad Workers Is an Attack on Democracy

“This is more than union busting—it’s democracy busting,” said Cox, who heads the largest federal employee union. “This administration seems hellbent on replacing a civil service that works for all taxpayers with a political service that serves at its whim.”

One of the most pernicious aspects of current civil service laws is that they make it virtually impossible to fire bad employees for any reason.

Civil service rules virtually guarantee jobs for life without even an expectation of competence. Career advancement is based strictly on seniority. This creates a system in which those who fail continue to fail unimpeded, and those who strive to succeed receive no reward.

The idea that taxpayers owe one a job in government, with no accountability to either our constitutionally elected leaders or the voters, is much more of an attack on democracy.

In President Andrew Jackson’s first message to Congress, he explained the concept of “rotation in office” and why it is dangerous to democracy for civil servants to believe that the American people owe them a government job.

Jackson warned that without the ability to remove government officers from time to time, a government job may become “considered as a species of property, and government rather as a means of promoting individual interests than as an instrument created solely for the service of the people.”

Rules allowing citizens to secure government jobs for life is the very antithesis of democracy.

One of the primary drivers behind the original civil service reform in the late 19th century was to end partisanship in the hiring process for federal workers. However, over a century later, it’s clear that the fourth branch is hardly nonpartisan.

In the 2016 presidential race, 95 percent of donations from federal workers went to Democrat Hillary Clinton. That pattern of support for Democrats persisted after the election too.

On a book tour after losing the election, Clinton advised federal workers to “stick it out, stick it out, because the tide has to turn.”

“If [Democrats] can take back one or both houses of Congress in 2018, you will have people you can talk to again,” she said.

Just after Trump was sworn into office, The Washington Post reported on how so-called nonpartisan civil servants were working with former Obama staffers to thwart the new president’s agenda:

Less than two weeks into Trump’s administration, federal workers are in regular consultation with recently departed Obama-era political appointees about what they can do to push back against the new president’s initiatives.

Some federal employees have set up social media accounts to anonymously leak word of changes that Trump appointees are trying to make.

According to Politico, many of those working for the Environmental Protection Agency, the State Department’s foreign service, and the Labor Department turned to encrypted messaging apps to hide their activities from the administration.

These actions demonstrate why the fourth branch has become so problematic. Are the administration’s policies to be determined by the president and his staff, who are democratically accountable to the American people, or a low-level bureaucrat who is accountable to virtually no one?

Some opponents of civil service reform say that stories of bureaucrats behaving badly are overblown. But this isn’t the case at all. The outrageous behavior of some federal workers demonstrates how important it is to make adjustments to the calcified system.

Many clearly criminal acts go unpunished. Federal workers who likely would have lost their job in almost any other workplace end up getting at best a slap on the wrist for terrible behavior, mostly because they are protected by rules for removal that rise to the scope and standard of proof in a civil trial.

A post office employee was convicted of using cocaine during a lunch break. Prosecutors proved in a criminal court that she was getting high on the job.

However, the Merit Systems Protection Board, which acts as the judicial power within the federal bureaucracy, overturned the postal employee’s initial firing, and she ended up with just a 90-day suspension.

This is only the tip of the iceberg of bad behavior that has gone unpunished because of civil service rules.

The truth is, civil service rules were ripe for change, and, following reforms in several states, the Trump administration has taken some critical first moves toward making the vast federal bureaucracy more accountable to the American people.