Why Trump’s Not Replacing Bureaucrats Enables the ‘Deep State’ 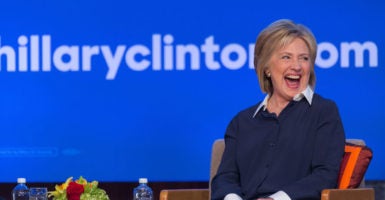 Hillary Clinton is urging federal workers to stay in their jobs so they can fight for progressive policies again.

On her book tour, the former secretary of state and presidential candidate told government workers to “stick it out, stick it out, because the tide has to turn.”

“If [Democrats] can take back one or both houses of Congress in 2018, you will have people you can talk to again,” Clinton said.

When Donald Trump was elected president, he promised to “drain the swamp” in Washington and return power to the American people. There is no muddier water to dredge than the mostly unaccountable administrative state.

Over the course of a century, the federal bureaucracy has become large, calcified, and unmanageable. It now carries enormous weight in crafting, implementing, and adjudicating policies that affect all of us.

For instance, the Health and Human Services Obamacare mandate, the transgender school bathroom policy, and numerous other rules and regulations under various departments have been created and carried out by the administrative state. It has become enormously powerful.

Worse, laws designed to ensure that the bureaucracy would be staffed with “nonpartisan” experts have had the unintended consequence of instead sealing numerous incompetents into a job for life. And many of these bureaucrats are hopelessly partisan, wedded to the ideas of big government and progressive reform for reasons of both ideology and personal interest.

According to The Hill, about 95 percent of political donations from federal employees went to Clinton during the 2016 presidential campaign.

One would think that those numbers would have changed in the nine months that Trump has been president. They haven’t.

A recent review of select federal agencies revealed that contributions from employees overwhelmingly have gone to Democrats in the 2018 election cycle, according to The Washington Free Beacon.

So much for the stories about bureaucrats quitting their jobs en masse if Trump got elected.

And it’s clear that a huge percentage of these civil service employees are hostile to the Trump administration’s agenda.

The Danger of Unaccountable Bureaucrats

While there are certainly many individuals in government who do good work and take their job seriously, there are others who have continually let down the American people, or worse, actively attempt to impede the policies of democratically elected leaders.

“I’m generally not going to make a lot of the appointments that would normally be—because you don’t need them,” Trump said in a Forbes interview. “I mean, you look at some of these agencies, how massive they are, and it’s totally unnecessary. They have hundreds of thousands of people.”

He’s also tweeted about this issue.

.@foxandfriends We are not looking to fill all of those positions. Don't need many of them – reduce size of government. @IngrahamAngle

“Every day, career bureaucrats are issuing decisions on guidelines and making interpretations of regulations,” Robert Moffit, a former Office of Personnel Management assistant director who is a senior health policy analyst for The Heritage Foundation, told The Daily Signal. “We need management there to take the bull by the horns.”

The problem is that the few top-level appointments he’d have direct control over are just a tiny drop in the bucket of the federal workforce. But without these executive appointees, agencies are left entirely to their own devices without any kind of political direction.

The “permanent state,” as former Trump adviser Sebastian Gorka has called it, is comprised of nearly 3 million federal employees, most of whom essentially can’t be fired by law (more on that later).

And they have certainly found ways to cause problems from the get-go in the Trump administration, such as subversively leaking information to the press, blasting the president on Twitter, and refusing to implement the administration’s immigration policies.

Former employees of the Environmental Protection Agency even created a memo, “A Practical Guide for Resisting the Trump De-Regulatory Agenda,” which essentially explains to current EPA employees how to resist the administration’s policy priorities.

The bureaucracy, the so-called “fourth branch of government,” now possesses legislative, executive, and judicial powers never dreamed of by the Founders, which has dealt a blow to the idea of checks and balances in government.

Letting agencies operate on their own with permanent civil service employees and Obama holdovers means that they are free to carry out the previous administration’s agenda virtually unimpeded.

How Did We Get Here?

At one time, the president had far greater power in selecting who worked for him. Initially, federal workers served more or less on an “at will” basis, meaning they could be fired for any reason, though presidents generally kept the limited number of civil servants in place from administration to administration.

Though some presidents were hesitant to fire civil servants for any reason, others were more aggressive in turning out bureaucrats who became problematic, complacent, or generally ineffective.

President Andrew Jackson perhaps most famously warred with federal bureaucrats and was accused of implementing a “spoils system” whereby removals and appointments were made on a purely partisan basis.

As I explained in a paper I co-authored for the American Legislative Exchange Council, many of the attacks on Jackson’s record were distortions or simply untrue.

Nevertheless, Jackson articulated a philosophy on government that should resonate with those frustrated with Washington today.

Jackson believed that “rotation in office” was essential to free government, and that it applied to federal workers. He believed he had to fire a few government employees to better serve the people.

While Jackson and others often used the system of rotation for good, there were undoubtedly abuses that took place over the years in which unqualified people got a job in government simply because of party affiliation.

So civil service reformers, particularly the progressives in the late 19th and early 20th centuries, passed a series of laws that made federal hiring based more on tests, while increasingly restricting the ability to fire or remove those employees. They dreamed that the fast-growing administrative state would be staffed by able, nonpartisan experts.

Today, nearly all federal employees are protected by civil service laws, except for those in the top-level political posts.

Changes Need to Be Made

Winston Churchill supposedly  once quipped that “after a time, civil servants tend to become no longer servants and no longer civil.”

Our laws now make it nearly impossible to fire a federal employee for almost any reason—including criminal behavior. And the process to fire someone is so onerous that few are willing to carry it out.

The result has been that we have a civil service that is neither affected by elections, nor nonpartisan, nor guaranteed to be staffed by experts.

It’s a mess. If Trump is serious about making his populist, “Jacksonian” message work in the nation’s capital, he’s going to have to do more to curtail the relentless power of the administrative state.

Trump has been slow at even dealing with the “shallow” state of political appointments that he has more immediate control over. He needs to make this a more pressing issue, or the swamp creatures will swallow up his administration.

Though Trump took an important step in nominating an Office of Personnel Management director, who is tasked with managing the federal workforce, more can be done.

Some states, like Georgia, have already innovated with policies that put employment for government workers on an “at will” basis. There have already been similar reforms of Veterans Affairs, but legislation is needed to apply these ideas to other departments.

Rep. Barry Loudermilk, R-Ga., has introduced a proposal that would significantly reduce the wait time for removing bad federal employees, which can take over 300 days.

Curtailing the power of the administrative state can’t be done with the snap of a finger, but it is an issue Trump and Congress must address—not just for the sake of this presidency, but for the sake of our constitutional republic.