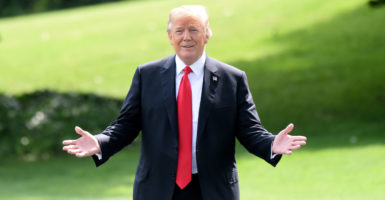 President Donald Trump walks to Marine One on Tuesday before departing for a trip to Nashville from the South Lawn of the White House. (Photo: Olivier Douliery/ Abaca Press/Newscom)

The staffs of state attorneys general have become fertile ground for President Donald Trump to pick appeals court judges, as the president has shifted the federal judiciary in a direction more in line with respecting state authority.

“They recruited the best and the brightest to serve their state and now the Trump administration is nominating these lawyers to serve as a federal judge or to a senior Administration position.” @RepublicanAGs says.

At least six circuit court judges nominated by Trump and confirmed by the Senate have been state solicitors general or deputy attorneys general. Such officials are the litigators on behalf of a state—typically on the front lines of legal fights, while the state’s attorney general is the public and political face.

Call them a farm team.

“Republican state attorneys general have defended the rule of law at every turn,” Scott Will, executive director of the Republican Attorneys General Association, told The Daily Signal. “They recruited the best and the brightest to serve their state, and now the Trump administration is nominating these lawyers to serve as a federal judge or to a senior administration position.”

Confirmed appeals court judges plucked from the top ranks of the offices of state attorneys general are:

“It takes a very sophisticated lawyer [to] work in an attorney general’s office, and there is a deep bench of talent,” said John Malcolm, head of the Institute for Constitutional Government at The Heritage Foundation.

“The Trump administration cares about state sovereignty and federalism, and many of these [nominees] are steeped in state law; some went on to become judges,” Malcolm said. “A solicitor general is litigating the most complex legal questions, and they are usually drawn from the top legal talent in a state.”

Examples of Trump’s nominees to district courts include: