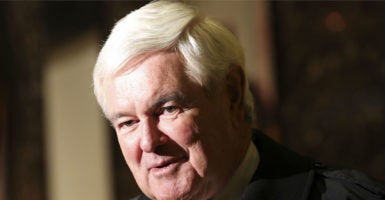 Former Speaker of the House Newt Gingrich at a meeting at Trump Tower with President-elect Donald Trump on Nov. 21, 2016. (Photo: Aude Guerrucci/CNP /AdMedi/SIPA/Newscom)

Among all the presidents he has dealt with, former House Speaker Newt Gingrich says Donald Trump is “the most unique” and is “changing history.”

The former House speaker has worked with many presidents, and said that although President Ronald Reagan “was remarkable in his own right,” Trump “is, in some ways, the most unique person I’ve ever worked with.”

He added: “Behind that tactical fluidity is enormous strategic steadiness.”

Gingrich made his remarks Tuesday at The Heritage Foundation, where he discussed his forthcoming book “Trump’s America: The Truth About Our Nation’s Great Comeback.”

The book is a follow-up to his 2017 book “Understanding Trump.”

Gingrich says he wrote the new book in order to capture the entire picture of the Trump presidency.

“With all due respect to the president, who is a remarkable figure and is changing history and has shown a level of calm, steady perseverance under circumstances that normal people would have buckled and collapsed under, this is only half the story of Trump,” the former congressman from Georgia said.

“It’s this coming together of Trump and Trump’s America,” he added.

In late 2016 and early 2017, Gingrich participated in a series of lectures at Heritage to explain Trumpism.

Gingrich credited the Trump administration with several major successes, despite the opposition by anti-Trump coalitions.

He cited the rapid nomination of federal judges, the effort to deregulate sectors of the economy, pulling out of the Iran nuclear deal, moving the U.S. Embassy in Israel to Jerusalem, the growing economy, promises of space exploration, and combating liberal bias on college campuses.

Gingrich, referred to by some as Trump’s “chief explainer,” is known for breaking through the media bias the president and his administration confront.

The media’s anger toward Trump goes back to the shock of the 2016 election, where the elites “checked out,” Gingrich said.

“At 10 o’clock on election night, the elites were having to confront that Donald Trump had been elected,” he said. “They have never recovered. That really explains that bitterness, and the hostility, and the anger.”

He added: “One of the reasons I wrote ‘Trump’s America’ is that it struck me that we needed to have a definition of what this fight was about.”

“There can be no compromise between Trump’s America and the anti-Trump coalition,” Gingrich concludes in his book. “One side will win. One side will lose.”