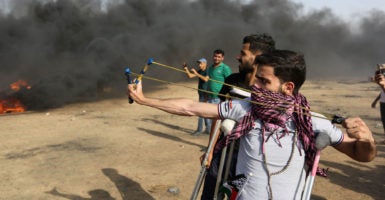 Palestinian protesters gather during clashes with Israeli security forces in a tent city protest at the Israel-Gaza border, May 18, 2018. (Photo: Ashraf Amra/apaimages/SIPA/Newscom)

No matter how often Hamas tells us that rioters on the Israel-Gaza border are armed, the media keeps referring to them as “protesters” and “demonstrators.”

No matter how often Hamas concedes that those rioters are part of a broader “war,” the media simply won’t report it as such. And even though rioters assure reporters they have a desire to kill and burn Jews, left-wing journalists and pundits continue to frame Israel as the aggressor.

Last week, a senior Hamas official bragged that 50 of the nearly 60 people killed by the Israeli Defense Forces at the Israel-Gaza border were members of Hamas. Israel has identified around 24 of those killed during the riots as Hamas members—10 of them reportedly members of the internal security apparatus. All of this is an amazing coincidence considering how the clashes have been portraying as a massacre of innocent civilians and children.

Hamas, of course, has no problem boasting about these deaths, but it’s the goal. If you’re going to embed armed terrorists in a ginned-up mob that has been propagandized, paid, coerced, and then sent toward military installations and civilian centers across the border, you are counting on causalities. Because martyrdom is the point.

Instead of taking them at their word, Hamas apologists continue arguing that Gaza is an open-air prison. This is only true if you consider people who lock themselves up as prisoners.

The controlling government, which took power through a violent coup against “moderates” after the Israelis gave Gaza autonomy, won’t accept any international laws or any set of rules that would allow peaceful interaction with its neighbors. Hamas runs a proto-terror state. And Iran, a fully formed terror state, has continued to send arms to the military wing of Hamas.

Now, it’s true that this entity isn’t nearly as powerful or as advanced as its neighbors, economically or morally. But al-Qaeda and ISIS and the Taliban are not as sophisticated as the United States. No one would frame those groups as victims. The idea that Israel, and Israel alone, should afford its enemies free reign over an adjacent territory does not comport with the practices or ideals of any other free nation in the world.

And although it’s rarely mentioned, Egypt has also had the border it shares with the Palestinians closed for the better part of a decade, not only because Hamas is funded by its enemy Iran, but also because Hamas is aligned with numerous other groups that embrace violent theocratic methods to further its cause.

And despite what you may have heard, the United States Embassy being moved to the western part of Jerusalem is not the cause of the unrest. Hamas itself didn’t recognize the American Embassy in Tel Aviv, or anywhere else. It doesn’t recognize Israeli sovereignty over any territory. It is not alone.

The precursor to Fatah, the Palestinian Liberation Organization, was formed before the 1967 unification of the Jewish capital. Since then there has not been a single Palestinian leader who has conceded that Israel should have sovereignty over any part of Jerusalem.

Then again, Palestinians have never defaulted to moderation on the status of Jerusalem or anything else. Their far-flung fantasies regarding the right to return (hitched to the historical myth of Nakba) consume them. This is what stands in the way of an agreement.

Fatah, the moderate Holocaust-denying wing of Palestinian governance, still runs a martyr fund that pays cash stipends to the families of those killed or imprisoned for carrying out terrorist attacks against Jews. Thanks to the help of international aid, it has been able to make those payments increasingly generous.

Now imagine what the extremist wing of that movement looks like. These riots are not driven by economic destitution but rather the frustration of Hamas, whose attempts at suicide bombing have been thwarted and whose attempts to fire missiles into Israel have been stymied by the Iron Dome defense system.

If this were about food and shelter, the Palestinian rioters would be headed to the government building in Gaza City rather than turning away Israeli trucks bringing them humanitarian aid. At this point, everyone knows that Israel has repeatedly shown a willingness to make peace with anyone who desires it.

The fact that those of Hamas are willing to sacrifice their lives (and the lives of their citizens) doesn’t suggest they aren’t the instigators or the guilty party.

There’s an obsession in the media with the disproportionate number of Palestinians who die in these conflicts. Some can’t escape the hackneyed oppressor-oppressed news template. Others allow their obsession with Donald Trump to cloud their view of the situation—not to mention their morality.

The fact is that if Hamas were to drop its claim on Israel proper and stop using every opening provided to instigate violence, not a single Palestinian would ever have to die in this war.