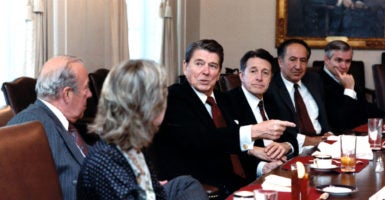 Richard Pipes was a distinguished Russian historian, influential public intellectual, and top adviser to President Ronald Reagan who helped end the 44-year-old Cold War. He died on Thursday at the age of 94.

Born in Poland in 1923, Pipes and his Jewish parents fled to Italy in 1939 soon after German troops entered Warsaw. They reached the United States one year later, settling in upper New York state. After receiving a B.A. from Cornell University, Pipes earned a doctorate in history from Harvard University in 1950. Soon thereafter, he began teaching at Harvard, where he remained for the rest of his academic career.

Pipes was one of America’s leading experts on communism when he took a leave of absence from Harvard in 1982 to join Reagan’s National Security Council staff. He was the principal author of two key national security decision directives: NSDD-32 and NSDD-75.

NSDD-32 declared that the United States would seek to “neutralize” Soviet control over Eastern Europe and authorized the use of covert action and other means to support anti-Soviet groups in the region, especially the Solidarity trade union in Poland. NSDD-75 called for the United States to seek not coexistence with the Soviet Union, but a fundamental change of the system.

Both directives became essential parts of the Reagan Doctrine, a multi-faceted foreign policy that included a substantial increase in pro-freedom public diplomacy, a drive to hurt the Soviet economy by reducing the price of oil, and U.S. support of anti-communist forces in Afghanistan and Nicaragua.

Pipes was the author of such ground-breaking books as “The Russian Revolution” (1990), which presented the Bolshevik Party as it truly was: a ruthless political faction, not the head of a popular movement. The book laid out how Bolshevik leader Vladimir Lenin founded a terrorist state that his successor, Josef Stalin perfected.

In this, he broke with more liberal interpretations that often sympathized with the Bolsheviks. He wrote that he considered it his duty to “spread a moral message by showing, using examples from history, how evil ideas lead to evil consequences.”

Pipes also played a key role in shaping public policy in 1976 when he led a group of military and foreign policy experts, known as “Team B,” in an analysis of Soviet military strategy and foreign policy. The team called for a more aggressive policy toward the Soviet Union and a turning away from a policy of accommodation, which had been recommended by “Team A,” the CIA’s own experts. Team B’s analysis paved the way for the offensive strategy of the Reagan Doctrine, which brought the Cold War to a close.

Known for his sweeping yet minutely detailed histories—“The Russian Revolution” is 842 pages long—Pipes could be concise when he needed to be.

In the Hoover Institution’s “The Collapse of Communism” (2000), he explained that the “incidental causes” of the dissolution of the Soviet Union in 1991 were the invasion of Afghanistan, the Chernobyl nuclear disaster, and the vacillating personality of Soviet leader Mikhail Gorbachev.

He also noted more profound causes like economic stagnation, the rising aspirations of Soviet minorities, and intellectual dissent within the Soviet Union. But the “decisive catalyst” of the Soviet collapse, he said, was the utopian and coercive nature of communism and its objectives.

With the collapse of the Soviet Union, wrote The New York Times, Pipes emerged as an esteemed Western historian in Russia—a novel change of circumstances for someone “who had been reviled by Soviet historians throughout his career.”

In the United States, the left had long denounced the Harvard historian. “Those who called me a cold warrior,” he wrote in his memoir “Vixi: Memoirs of a Non-Belonger” (2003), “apparently expected me to cringe. In fact, I accepted the title proudly.”

In writing history, Pipes argued, “fundamental philosophical and moral questions can never end. For the dispute is not only over what has happened in the past but also what may happen in the future.”

Throughout his life, Pipes asked fundamental questions about U.S. foreign policy. He not only wrote history, but helped to make it, and in so doing helped to end America’s longest conflict—the Cold War.