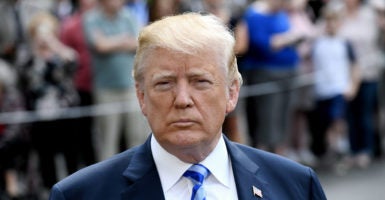 President Donald Trump is on pace to have more judicial picks confirmed than any past president in the first two years of a term. (Photo: Abaca Press/Douliery Olivier/Abaca/Sipa USA/Newscom)

The Senate confirmations on May 15 of two more of President Donald Trump’s judicial nominees bring the total number approved so far in the 115th Congress to 39.

Twenty-one of the 39 have been to appeals courts. The appeals court total is the highest at this point of any president in history.

Trump has made 114 nominations to the U.S. district courts, courts of appeals, and the Supreme Court—again, more than any of his predecessors at the same point in their presidencies.

The Senate Judiciary Committee has held hearings on 81 of those nominees, also ahead of the pace under previous presidents.

The context for the confirmation progress to date is a campaign of relentless obstruction aimed at minimizing the impact that Trump can have on the federal judiciary.

Senate Democrats refuse to consent to ending debate so that confirmation votes can be scheduled. They have forced the Senate to take formal cloture votes on 36 of the 39 nominees confirmed so far.

By comparison, the Senate had taken only three cloture votes on judicial nominations at this point under the previous 12 presidents combined. That’s every president since the cloture rule was applied to nominations in 1949.

Each time the Senate majority leader must file a motion to invoke cloture draws out the process in two ways. First, under Senate rules, the cloture vote cannot occur until two session days later. Second, even when cloture is invoked, Senate rules provide for up to 30 additional hours of debate.

As Sen. Orrin Hatch, R-Utah, pointed out in a March 20 floor speech, in addition to the sheer number of cloture votes, the time between cloture and confirmation votes for Trump’s nominees is more than 50 percent longer than it was for nominees of Democratic President Barack Obama.

That’s just one way in which Senate Democrats are trying to make confirming Trump’s judicial nominees as cumbersome and time-consuming as possible. Doing so is not simply stymieing the president, it’s also preventing much progress on the vacancy crisis facing the federal courts.

Today, vacancies on the federal trial and appellate courts are 30 percent higher than when Trump took office and are the highest totals since mid-1991.

The large number of vacancies in 1991, however, was primarily a result of Congress creating 85 new judgeships a few months earlier. As such, it’s safe to say that the vacancy crisis today is at an unprecedented level.

The president is making nominations, and the Judiciary Committee is processing them. Despite the concerted chokehold being applied by Democrats, the Senate has already confirmed more appeals court judges than during the entire first two years of most new presidents.