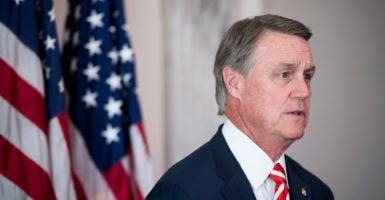 Sixteen Republican senators are asking their colleagues to pass a budget and confirm President Donald Trump’s nominees before the end of the fiscal year Sept. 30.

“It is time to drain the swamp, and we can help do that by keeping the pumps running in August,” Sen. Steve Daines, R-Mont., said at a press conference Tuesday aimed in part at Senate Majority Leader Mitch McConnell, R-Ky.

“It is time to cancel the August recess, keep members here, get the spending bills passed, and get President Trump’s nominees through the Senate and working on behalf of the American people,” Daines said.

Daines signed a letter with 15 other senators asking McConnell for the Senate to work Mondays and Fridays, and nights and weekends, to confirm Trump’s judicial and executive nominees and fund the government before the Sept. 30 deadline.

“Today, 15 months into this presidency, we have 276 nominees backlogged, waiting for confirmation hearings … this is nothing but pure, unadulterated obstructionism,” Sen. David Perdue, R-Ga., told reporters.

It is nearly 16 months since Trump took office on Jan. 20, 2017. As of Wednesday, the number of pending nominations has increased to 283.

In their letter, the lawmakers say they hope to have the kind of success they saw last year when they campaigned to cancel the August recess and worked to confirm 77 nominations with no floor debate.

“Our diligence was rewarded with reason, and it can happen again,” the 16 senators write.

Daines, Perdue, and others said they want to work to pass a budget and avoid pushing through a last-minute omnibus spending bill as lawmakers did March 23. Trump threatened to veto that spending package before ultimately signing it and vowing not to do it again.

“We want to make sure we fund the government without having to use a continuing resolution or backing into a year-end omnibus,” Perdue said.

Sen. Joni Ernst, R-Iowa, said other Americans don’t have the luxury to shirk their work like Congress does.

“As far as I know, being a member of Congress is the only occupation where you can neglect some of the most important duties and then take a monthlong vacation right before the deadline,” Ernst said.

“Our constituents deserve better than this cycle of governing from crisis to crisis. Congress hasn’t passed a budget and regular appropriations bills,” she said. “If they haven’t by August, we shouldn’t be able to leave on vacation or go home or go wherever.”

We received this 2,232-page spending bill a few weeks ago on a Wednesday evening. Then when we found that it was passed by the House before lunch the next day, and passed by the Senate that night, it occurred to many of us that this is not OK, especially when you consider the fact that most of the 435 members of the House and most of the 100 members of the Senate and more importantly, most of the people represented by those members of Congress, were completely kept out of the loop of that process.

Daines said the Senate must overcome Democrats’ obstruction to accomplish the will of the American people.

“We were six months into the nation’s fiscal year before Congress finally passed a spending bill,” Daines said. “That is unacceptable. Congress is not getting the people’s business done and not getting it done on time. This is because a great obstruction is going on right now in this Congress. It is time to move beyond that and finish the work that the people asked us to do.”

“Sen. McConnell will make an announcement about that at some point. I think he wants to consult with Sen. Schumer and the president,” Cornyn said, according to Politico. “He’s seriously considering what to do.”