Why These Members of Congress Want to Cancel the August Recess 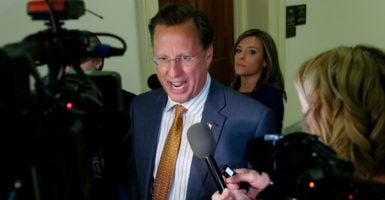 Rep. Dave Brat, R-Va., is one of various lawmakers in Congress who want to cancel the August recess in order to work on pressing legislative priorities. (Photo: Jonathan Ernst /Reuters/Newscom)

“There is only one place that we can do legislation and that is in Washington, D.C., and I think it is critical that we stay in and do the people’s business,” Rep. Mark Meadows, R-N.C., chairman of the House Freedom Caucus, told The Daily Signal in a phone interview.

Lawmakers, Meadows said, have legislative priorities such as repealing and replacing Obamacare, passing government funding before the Sept. 30 deadline, and passing a promised overhaul of the tax code.

“Most Americans believe that we are entitled to a short vacation but taking off the entire month of August and the first week of September at this critical juncture is not deemed as wise or appropriate,” Meadows said.

Rep. Jim Banks, R-Ind., a freshman member of Congress, told The Daily Signal in a phone interview that he sees the August recess as a very crucial time, but said pressing legislative matters might take precedence over its importance.

“I’m very busy in my district when I go home and my constituents are asking me why we are not getting more done in Washington, D.C., than what we are, and that might be a good justification for giving up the August recess so we can [be] focused and get more done and accomplish the big issues we set out to do in the Congress,” Banks said.

The August recess was made official in 1970 when it was passed as part of the Legislative Reorganization Act.

The Legislative Reorganization Act, among its reforms, sought to update legislative procedures by installing electronic voting in the House chamber and making committee hearings public, with the exception of national security and appropriations hearings.

Recently, the August recess was shortened in 2005 when the House was called into session four days before its scheduled return to provide emergency funds to Hurricane Katrina relief efforts.

The House Freedom Caucus took an official position in early June on staying in D.C. to work over its August recess.

Some members of the House Freedom Caucus signed on to a letter sent to House Speaker Paul Ryan, R-Wis., June 30, asking him to cancel the recess.

“We request that you cancel Congress’s current plans to recess for the month of August to ensure there is enough time to address the long list of pressing issues on our docket,” read the letter, which was organized by Rep. Andy Biggs, a member of the House Freedom Caucus.

Today, I sent a letter to @SpeakerRyan, requesting that we cancel the August recess. We need to work on our agenda https://t.co/de1Dl33dc8

In a phone interview with The Daily Signal, Biggs, R-Ariz., said he thinks the push to work over the recess is merited.

“I think it is critical for policy and politics,” Biggs said, adding:

No. 1, we promised we’d get so much done and we may be running just a tad behind where we thought we would be. And if we’re looking at having to have a budget completed by [the] end of September, we really need to be working on it until we get that budget done.

Rep. Ken Buck, R-Colo., said that canceling the August recess would give lawmakers a significant chance to show leadership.

“I think that while there are some good things that happen] in August, and one of them is we get away from the heat of Washington, D.C., the reality is that we get a lot more done if we are here, and working hard, and I think the American people will be impressed with that effort,” Buck added.

Rep. Dave Brat, R-Va., told The Daily Signal in a phone interview that several matters must be settled before lawmakers should be allowed to go home to their districts in August.

“There’s no way we can go off on August recess without having closure on health care and the tax piece at a minimum and having the tax piece ready to go,” Brat said.

“My No. 1 thing is that this should be conditional,” Davidson told The Daily Signal in a phone interview. “There is a lot of desire for people in our districts to meet with us and you know you should be clear that the vast majority of Congress doesn’t use August recess for, you know, ‘Gee, there’s no work that is accomplished then.’”

More goes on than what one might first realize, Davidson said.

In the upper chamber, the push to cancel, or at least shorten, the August recess is gaining ground.

Sen. James Lankford, R-Okla., along with nine other senators, also sent a letter June 30 to Senate Majority Leader Mitch McConnell, R-Ky., asking him to cancel or shorten the August recess:

There are five imperatives which must be accomplished this year. We must complete the first phase of Obamacare repeal and replace. Next, we have to pass a budget that serves as a reconciliation vehicle for reforming our outdated tax code. Before Sept. 30, we must agree on an appropriation that responsibly funds the government. Also, we must deal with our debt limit before that approximate date.

“We are united in our belief that we must work with a sense of urgency to deliver conservative solutions for pressing legislative issues on behalf of the American people,” the letter reads.

Sen. David Perdue, R-Ga., has also voiced support for staying in D.C. over the August break.

>>> It’s Time to Pull the Plug on August Recess

“There are a number of us saying we just don’t see the number of days left in the fiscal year as being adequate,” Perdue said in a statement provided to The Daily Signal. “We have a five-week work period during which we go back to the states and travel, but if we don’t get this done, we ought to stay here for a few weeks and focus on getting some of these priorities done.”