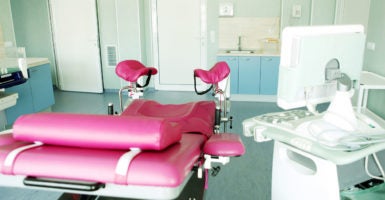 Unfortunately, Robert Rho is just the symbol of a broader abortion movement that cares more about making a profit than providing for the well-being of women. (Photo: Nenov/Getty Images)

For Robert Rho, destroying tiny lives was all in a day’s work. He performed so many abortions, more than 40,000, that one more death probably seemed insignificant—until 2016, when that death was one of his 30-year-old patients.

Jaime Morales was six months pregnant when she went to Rho’s office in Queens. It turned out to be the last time she would go anywhere. In snuffing out the life of her perfectly viable baby, the New York doctor managed to sever Morales’ uterine aorta, rip her cervix, and pierce her uterine wall. Rho knew she was in danger. When the bleeding wouldn’t stop, he had to perform another procedure. It didn’t work, but after she collapsed in the bathroom, Rho sent her home anyway—refusing to call an ambulance.

In the car, Morales slipped into unconsciousness—and by the time her sister reached 911 and got her to a hospital, it was too late. The young mother died. Now, two years later, Rho is in court, where he should have faced 15 years for manslaughter. But, just as the jury was about to weigh in with its verdict, the attorney reached a plea deal with prosecutors that will let Rho off with just months in prison—a victory his lawyers call “monumental.”

For the Morales family, who lost so much on that awful July day, Rho’s actions were no “accident.” It was negligence of the worst kind—the sort of criminal callousness that’s taken hold in abortion centers across the country. Assistant District Attorney Brad Leventhal argued that this whole case went beyond malpractice. “It’s about greed and arrogance.” Jaime Lee Morales, he told the jury, “bled to death because this defendant did nothing.”

Unfortunately, Rho is just the symbol of a broader abortion movement that cares more about making a profit than providing for the well-being of women. His Liberty Women’s Health of Queens office is closed, but hundreds of other abortion offices are still open and operating without the barest of concerns for mothers’ health.

Planned Parenthood has spent millions of dollars fighting commonsense standards and safety regulations that would help keep women like Morales alive. To their dismay, even states with some of the bluest roots stand behind sensible measures like abortion waiting periods, fetal pain bills, hospital admitting privileges, mandatory ultrasounds, licensed staff requirements—and, in a minor’s case, getting a mom or dad’s okay.

For an industry supposedly predicated on “women’s health,” you’d think the clinics would be supportive. Think again. These businesses would rather make money than spend any on state-of-the-art care for mothers.

Instead of giving women the cutting-edge care they claim to, groups like Planned Parenthood want to subject mothers to clinics with looser regulations than a public pool. No wonder taxpayers are desperate to defund them.