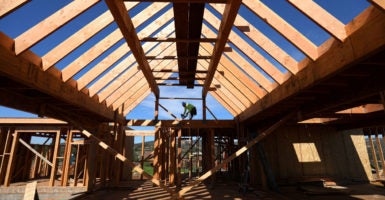 The April report shows impressive gains in sectors that have been targets of the Trump administration, including manufacturing (+24,000 jobs), construction (+17,000 jobs), and mining (+8,000 jobs). (Photo: Mike Blake/Reuters/Newscom)

The very positive April jobs report supports the idea that pro-growth policies are the best way to create more jobs, and attract more people into the workforce to fill them.

In April, the U.S. economy added 164,000 jobs (slightly lower than experts’ predictions) and the unemployment rate reached its lowest level in over 17 years, at 3.9 percent. That’s down from 4.8 percent, the rate when President Donald Trump took office. In addition to this, the U.S. is setting employment records for African-Americans, women, Hispanics, and workers without high school diplomas.

The report also touts impressive gains in sectors that have been targets of the Trump administration, including manufacturing (+24,000 jobs), construction (+17,000 jobs), and mining (+8,000 jobs). Since Trump was elected in November 2016, these sectors have seen consistent, steady growth.

Other notable gains in April occurred in professional and business services (+54,000 jobs), and in health care (+24,000 jobs). These two categories combined have created 709,000 jobs over the past 12 months.

At the end of each jobs report, the Bureau of Labor Statistics revises jobs numbers from the two months preceding, meaning these numbers have a high potential to change for the positive and the negative. Fortunately, the revisions for February and March said the economy created 30,000 more jobs than previously reported, bringing the three-month average to 208,000 jobs.

However, there is one concerning number in the jobs report: the reason the unemployment rate is dropping so low is a decline in the labor force of nearly 236,000.

The impressive unemployment number (3.9 percent) measures the people who are not employed, but still in the labor force. That means 96.1 percent of those who want a job found one.

But what about the people who are able to work but have given up looking? This is what the labor force participation rate measures.

There are several possible reasons for this. Whether it be the baby boomers retiring, the growing workforce skills gap, or people unwilling to give up government benefits, many Americans are apparently not motivated to jump back into the workforce.

It was recently reported that there are 6.6 million open jobs in the U.S., and a similar number of people who could fill those jobs. To get these Americans back into the labor force, business owners will need to be more competitive. This could manifest itself through increased wages, offering training, and more flexibility.

What’s the government’s role in this? Get out of the way!

Pro-growth reforms like tax cuts and regulatory reforms give business the incentive to invest, and plan long-term. This means that business owners will buy new equipment that helps them run more efficiently, and more importantly, enables them to offer higher wages.

While it is a good thing that wages and earnings have steadily been increasing—average hourly earnings are up 67 cents over the last year—many able-bodied people are still on the sidelines.

The good news is that may soon change because of tax reform, a concerted effort to shrink senseless business regulation, and an improved posture from Washington to get out of the way. For instance, we are seeing small businesses flourish. With more money in their pockets, business owners will be able to do the things necessary to make them more competitive in a tight job market.

Here is the reality: We only have so many people in this country able to fill the open positions. Companies do not need a government program to fill them. Instead, they need a vibrant, growing economy with low taxes and fair regulations. So let’s make the  tax cuts stronger and permanent, and continue cutting regulations.

In pitching tax cuts as a way to stimulate economic growth, President John F. Kennedy famously said, “A rising tide lifts all boats.” Since Trump took office, we are seeing better economic growth, business confidence on the rise, and job opportunities for Americans abound. The tide is rising, and if Washington continues to get out of the way of business, the number of Americans in the workforce will rise as well.