Post Deal, How the US Can Keep Pressuring Iran 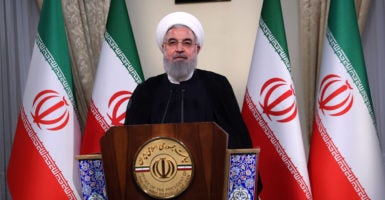 Iranian President Hassan Rouhani addresses his nation in a televised speech in Tehran after President Donald Trump withdraws from the 2015 Iran nuclear deal and says the country would restart enriching uranium "in the next weeks." (Photo: AY Collection/SIPA/Newscom)

While President Donald Trump said the United States would give Iran a shot at making a more effective nuclear deal, experts—even those who backed the president’s decision to withdraw from the 2015 agreement—contend that will be a tall order.

“We will be putting on among the strongest sanctions that we’ve ever put on a country, and they’re going into effect very shortly,” @RealDonaldTrump says.

“I give the decision two cheers and I’m reserving the third cheer to see what replaces the Iran deal,” Ilan Berman, senior vice president of the American Foreign Policy Council, told The Daily Signal.

Trump talked broadly about what the next step will be.

“We will be putting on among the strongest sanctions that we’ve ever put on a country, and they’re going into effect very shortly,” Trump told reporters Wednesday. “They’re mostly constituted and drawn already and we’ll just have to see what happens.”

Trump said the deal he scraped “hurt the world.”

While the 2015 deal infused billions back into Iran, the country is having serious economic problems, Berman said.

“We need to lean on other jurisdictions to freeze those assets. Our allies have to be willing to,” Berman told The Daily Signal.

Still, it will be a major challenge, Berman explained.

“It would be a disservice to minimize the political and economic turbulence between the U.S. and the P5+1, and how difficult it will be to reimpose a sanctions regime,” Berman said.

The United States, Britain, France, China, and Russia are the five permanent members of the United Nations Security Council. Each was involved in securing the deal, as was Germany. Thus, the term P5+1 came to be used among officials to describe parties to the deal.

A new approach has to encompass curbing Iran’s nuclear expansion through a new international sanctions regime and scaling back Iran’s influence over the Middle East and its sponsorship of terrorism, Berman said.

Pulling out of the deal will likely have one immediate economic impact, said Chris Kukk, a former Army counterintelligence officer who is now a political science professor at Western Connecticut State University.

“In the short term, Iranian oil will be cut off from the world market and that will lead to an slowdown in the world economy,” Kukk told The Daily Signal. “The only way to dig out of this hole is to come back to the table. This is not a business deal. The diplomatic world works differently.”

“An agreement opens the door for more intelligence gathering to happen. Now that will be much more difficult,” Kukk said. “To scrap the agreement doesn’t put you back to square one, it puts you back to negative 10.”

Iran could be more likely to come back to the bargaining table than its leaders have publicly stated, said Jim Phillips, senior research fellow for Middle Eastern affairs at The Heritage Foundation.

“It is natural that Iran has reacted to the U.S. withdrawal in an alarming fashion because the deal was much better for Iran than for the U.S.,” Phillips told The Daily Signal.

The Europeans also seek to avoid confronting Iran as long as possible to maximize their profits from trade with Iran.

But it is better to confront Iran on the nuclear issue now, while it is economically weak and much farther from a nuclear breakout, than it would be in 13 years, after its nuclear program had expanded greatly and it was much better positioned to stage a rapid nuclear breakout which the U.S. and other states would have much less time to counter through sanctions, diplomacy, or military means.

“The question is: Will European governments come to see that it is not in their best interest to support a common enemy because it will only become more dangerous?” Gaffney, president of the Center for Security Policy, a national security think tank, told The Daily Signal.

“I suspect not. But I hope European capitals will be dissuaded from acting aggressively to prop it up,” Gaffney said.

Gaffney regrets that so much money went into Iran upfront, but said it’s clear it hasn’t been used to improve the lives of people.

“The interesting thing is we still don’t know how that money was spent,” Gaffney said. “Presumably the money went to the nuclear program. Presumably it went to terrorism or bureaucrats’ bank accounts. It didn’t go to attenuate to the problems at home. That will make it easier for economic pressure to liberate the Iranian people.”

“Western Europe doesn’t have much of an appetite. It will be a tough sell,” Cortes, a CNN political commentator who serves on Trump’s Hispanic Advisory Council, told The Daily Signal.

The solution is ultimately an economic one, said Cortes, who previously worked on Wall Street.

“We need to deprive Iran of the cash it so desperately needs and encourage change within the Iran regime to moderate or be replaced from within,” Cortes said. “The biggest mistake of the deal was giving the money back immediately instead of drifting piecemeal.”