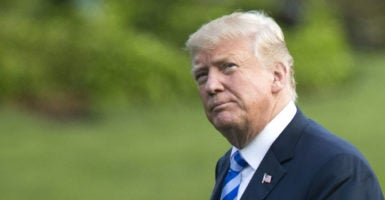 The family of Tony Kim, one of the three American prisoners released Wednesday by North Korea, is thanking God and President Donald Trump for being freed from captivity.

Kim, previously a professor at Pyongyang University of Science and Technology, was detained by North Korean authorities in 2017 on charges of “committing criminal acts of hostility aimed at overturning the DPRK.”

After a year in captivity, he is finally on his way home, along with two other American men held prisoner, Kim Dong Chul and Kim Hak Song.

“We are grateful for the release of our husband and father, Tony Kim, and the other two American detainees. We want to thank all of those who have worked toward and contributed to his return home. We also want to thank the president for engaging directly with North Korea,” the family said in a statement, adding, “Mostly, we thank God for Tony’s safe return.”

We appreciate all of the support and prayers of friends and even strangers during this challenging year. You are dear to our hearts. We ask that you continue to pray for the people of North Korea and for the release of all who are still being held. Thank you.

Secretary of State Mike Pompeo made his second trip to North Korea on Wednesday to lay the groundwork for the president’s unprecedented summit meeting with North Korean leader Kim Jong Un, as well as secure the release of the three American prisoners held in North Korea.

Trump announced the release of the prisoners Wednesday morning on Twitter, also saying the date ad place for the summit are “set.”

I am pleased to inform you that Secretary of State Mike Pompeo is in the air and on his way back from North Korea with the 3 wonderful gentlemen that everyone is looking so forward to meeting. They seem to be in good health. Also, good meeting with Kim Jong Un. Date & Place set.

“My family and I long to make contact with my dad,” Sol Kim, Tony Kim’s son, told Fox News in February, adding, “We want to tell him that he’s soon going to be a grandfather.”

Upon returning to the U.S., Kim will be able to see his grandchild for the first time.