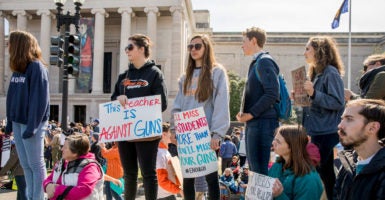 Protesters participate in the March for Our Lives rally on March 24, 2018, in Washington, D.C. (Photo: Jeremy Hogan/Polaris/Newscom)

D.C. Public Schools announced April 28 that just 46 percent of seniors in the District’s traditional high schools are on track to graduate in June.

Not to worry, however: The D.C. Council isn’t likely to let that minor detail stand in the way of allowing 16- and 17-year-olds to vote.

There’s a reason the Republican-controlled Congress hasn’t relinquished its role as a backstop on the excesses of D.C. home rule, as Democrats would like it to. Simply put, it’s because there’s no liberal idea too outlandish for the D.C. Council, which is a Republican-free zone with 11 Democrats and two nominal independents.

The latest example is the notion of lowering the voting age in the city to 16, and apparently there now is majority support for it on the 13-member D.C. Council.

It wasn’t always so. When D.C. Council Member Charles Allen first floated the idea back in 2015, it went nowhere fast—dying in committee, deservedly so.

Back then, Allen, Ward 6 Democrat, was unable to answer his own question to the satisfaction of his colleagues: “How can you convince me that a 16-year-old is mature enough, smart enough, engaged enough?”

But that was then, and this is now.

When Allen resurrected the idea in April, he didn’t have to do anything to persuade his colleagues to clamber aboard the bandwagon. A majority signed on as co-sponsors, and Mayor Muriel Bowser expressed support for the idea.

So, what has changed?

There hasn’t been any indication of academic improvement in the D.C. Public Schools in the three years since then to suggest that 16- and 17-year-olds are now suddenly “smart enough” to have the franchise extended to them.

To the contrary, only 1 in 7 D.C. high school students was deemed in the most recent standardized tests to be proficient in math. That’s despite a public education system in the city that spent $17,953 per student in 2013, according to Census Bureau figures released in June 2015. Another, more recent estimate puts the figure much higher, at more than $27,000 per student per year.

The only thing that has changed is the surge of left-wing high school student activism that grew out of the mass shooting at Marjory Stoneman Douglas High School in Parkland, Florida, in February that left 17 dead.

That activism—exemplified by Parkland student David Hogg’s scattershot calls for boycotts of any and all opponents of the gun control agenda—has been described on the editorial page of The Washington Post as “thoughtful and influential.”

The liberal student activism was apparently the game-changer for a heretofore skeptical D.C. Council.

Never mind that the professional community-organizer left and the gun-control lobby—and not 16- and 17-year-olds—did most of the heavy lifting in organizing the so-called March for Our Lives anti-gun rally in Washington on March 24, or that only about 10 percent of the marchers were under 18 years of age. (The average age of the marchers, according to a Washington Post analysis, was just under 49.)

But that’s no more likely to dissuade anyone on the D.C. Council, however, than the dismal academic performance of students in the District’s public schools.

It would be bad enough if the District were just looking to mimic the suburban D.C. communities of Takoma Park, Greenbelt, and Hyattsville in Maryland, in allowing minors to vote in local elections. Allen’s proposal, however, would allow high school sophomores and juniors to vote in federal elections for D.C.’s congressional delegate and for president, as well as for the D.C. Council and mayor.

“At the age of 16, our society already gives young people greater legal responsibility. They can drive a car. They can work. … They pay taxes,” Allen argues. “And yet, they can’t exercise their voice where it matters most—at the ballot box.”

But that argument cuts both ways. A 1984 law passed by Congress, the National Minimum Drinking Age Act, prodded all 50 states and the District to raise the age for purchasing alcohol to 21.

The District raised the age for buying tobacco products from 18 to 21 in 2016. (California, Hawaii, New Jersey, and Oregon, soon to be joined by Maine, also bar tobacco sales to those under age 21 as well, as do hundreds of cities in at least 14 other states, including Boston, Cleveland, Chicago, New York City, St. Louis, and San Antonio.)

Moreover, in the wake of the Parkland, Florida, shootings, more cities and states are raising the age for purchasing guns to 21, most recently Vermont, despite the Green Mountain State experiencing very little in the way of gun-related violence.

The premise for raising the age for the purchase of alcohol, tobacco, and firearms is that 18-, 19-, and 20-year-olds are not sufficiently mature.

How is that consistent with lowering the voting age to 16 years old? The short answer: It isn’t.

If the District were allowed to lower the voting age to 16, it would surely prompt other blue bastions of liberalism—in “monkey see, monkey do” fashion—to follow suit.

Congress should send a signal to the District that it would veto any such change, under authority it retained in enacting the 1973 District of Columbia Home Rule Act. That law gave the D.C. Council the ability to pass local ordinances, but they remain subject to approval or veto by Congress.

Just because the Constitution doesn’t prevent states from lowering the voting age further, doesn’t mean they should do so.